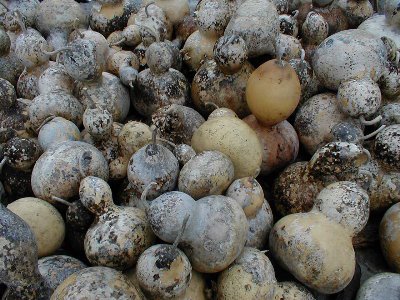 A pile of gourds drying

This week we were able to get pretty much the last of the crap from the old farm. Eugene seems to think there is more stuff to get but I say that is just the pack rat coming out in him. From what I can see all that is left is trash. Ah he can deal with that sort of thing-if he wants to take a day and load trash into the van and move it somewhere let him.

Monday he got the perennial herbs, the rest of the peonies, the rest of the parsnips (which, I believe, means the garden is empty of food except for a few kale plants that are on their own) and a pine tree Doug Ross gave me two years ago for my 40th birthday (which is now in front of the house, where it should grow into a majestic tree). he also dug up many buckets of day lilies in all sorts of colors. I have been propagating day lilies for about 5 years now and had a pretty good sized bed (maybe 15' x 15') going at the old farm. Now it looks like I have enough to do a 30' x 30' bed

Yesterday Eugene planted the perennial herbs-thyme, oregano, tarragon, lovage and some chives (chives are a poor seller for us but a garden just ain't complete without them and the are sooo easy to grow). This morning he planned on mowing the field where the garden beds are going but an early snow dissolved those plans quickly. By early I mean in the day-snow was predicted by the prognosticators we call the weather people. they had predicted a dusting of snow to fall sometime this afternoon but the snow decided to come early and drop a couple of inches. Makes it pretty outside.

So instead of farming we are cooking. I am doing the stuffing/dressing today and if I get motivated will also do the rolls today (at least get them proofed and par baked). Eugene is making an apple pie that smells Fantastic. he is a very good pie maker. he is not much of a cook otherwise, serviceable but not great. But his pies are to die for, he could make a living selling these things, I think. But pie making would bore him and farming fascinates him so I don't see the pie sales happening.

Friday is Buy Nothing Day
and buying nothing is my plan on Friday
Posted by Lucy at 3:12 PM