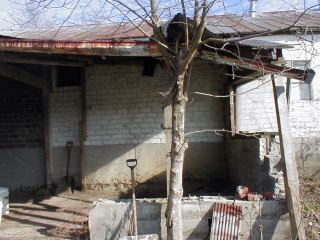 Before demolition. Note how the shed is being held up mostly by the tree 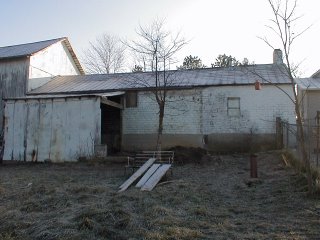 After demolition. Still have to remove the cinder block wall and the the tree but the rest is gone.

The demolition on the broken building is completed and it looks like we will put a greenhouse of some sort there where the shed and wall used to be. The question is what kind of greenhouse? There is no concrete pad in this area , just dirt that needs a lot of leveling where there was a wall and a medium sized tree.

We could build our own structure out of the various wood and metal we have lying around. This would be cheap and Eugene loves this sort of challenge but it will take time to amass all the materials from around the farm and the structure will have flaws that will need fixing. Or we could go the expensive way and buy a kit from a place like Ludy Greenhouses. This will be a lot more expensive but we will have a really nice greenhouse that will not have flaws (of if it does it will also have a warranty) and will likely produce better and will be built in a couple of days rather than a couple of weeks.

Because we have been farming on the cheap for so long this kind of idea, buying a kit, is really alien to us. We tend to buy used equipment at auctions or fabricate it ourselves. This system works and is cheap but is also takes more work and time. And time can be an issue on a farm. If you ar spending time fixing equipment than you are spending time farming. In the winter this is not an issue but the rest of the year it is.

But in the case of the greenhouse we are talking the difference between $500 and $2000. And we know we can build a $500 greenhouse that will last at least 10 years because we already have done it with one on the other farm. And that hoophouse (our first) was out in the open. This one will be built in a very protected area so should not be bearing the brunt of the storms. The old hoophouse often looked as though a giant had sat on it after really heavy winds. But Eugene would go out and spend a few hours fixing the purlins and putting the thing back together and make it all good again.

We still have not decided what to do with the area of the shed still standing that is on the concrete pad. I think it would be a really nice place to put the forge but it would also make a decent wash rack/packing shed for the produce
Posted by Lucy at 9:37 AM