It Is Not Winter

I don't care that it says January 16th on the calender it is not winter!
We have had 2 thunderstorms this month and zero snow. The temps have been about 20˚F to 30˚F above normal most of the month. More like march than January.

And this means that it is easier to get the winter projects done. We have 235 beds planned for the top field and now have 15 opened up (and 5 planted). 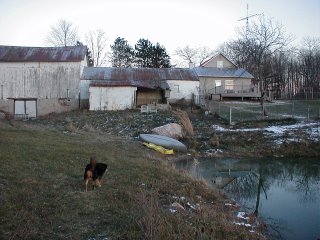 This shed like structure tacked on to the back of the barn (the building in the middle directly behind the canoe) that needs to come down. Eugene is planning on turning that into a greenhouse using windows he has collected over the past 10 years and lumber he has found around the farm.

We have a store front to get into shape before mid April. Right now a wall is being built of found objects which turning into a nice project. I decided we needed to break up the space and have some sort of storage/packing area so this is why a wall is being built. The place also needs some serious drywall repair, molding replaced and painting.

We need chicken housing if we are to have layers. Chicken tractors are fine for the meat birds but hens have special needs such as nesting boxes and a year round home that is tight and dry and predator proof. Chicken tractors cannot do these things but a permanent coop can. So a chicken coop is on the list of projects. We are fortunate to have some sort of feed bin to cannibilize sitting in the area we have already named "The Chicken Area". May have to have another chicken coop raising party in the very near future. We had a coop raising about 8 years ago at the old farm and it went extremely well. The coop is still there and in very good condition, though I suppose that will change if no one uses and maintains the structure. Or uses it hard and puts it away wet, if you will.

We have seeds ordered and on the way and that means we will soon be starting seeds for the market garden. I do most of the seed starting and care of the seedlings. I expect the unexpected this year as the set up is brand new and untested. The plan is to grow the seedlings in the barn in the room off the south end of the barn. It has heat and good southern light to supplement the artificial light. The only problem is we are using the place now as a root cellar. The squash, carrots, onions, etc., will not tolerate the temps this room will need to be so they will have to be moved somewhere else and where that is has not been discovered yet.

And that leads to the root cellar we need to build before next winter so we do not have this conflict again. Right now the plan is to build one into the side of the hill.

More proof it is not January, the perennial flowers are poking out of the ground. I have seen peonies, daffodils, lilies and thistle coming already. I do not worry about these things breaking dormancy too early as they generally survive easily any cold weather that comes after beaking dormancy. I assume the garlic is pushing up greens too but I have not looked under a row cover to check.