Fedco and why Boulder Belt will be Growing Heirlooms 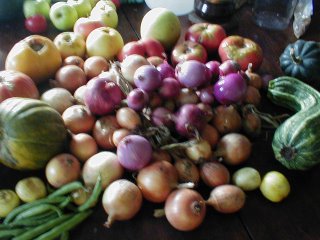 God, I love Fedco Seeds. I got their catalog in the mail two days ago and found CR Lawn (yes that is the owner's real name) has decided to drop any and all seeds owned by the Monsanto Corporation. This was not a huge problem last year but over the past year Monsanto has bought Seminis seeds and Seminis had about 1/5th of the catalog of the world's vegetable seeds, mostly hybrids.

Now why did Fedco drop Monsanto? Because Monsanto is the biggest seller of ag chemicals and Genetically Modified Seeds (AKA GMO). They have 88% of the GMO market world wide and now they want to take over the veggie seeds and likely make many of them into GMO's. Monsanto is the 1800 pound gorilla that a lot of us small sustainable hippy farmers rail against. They have been quite hostile to our way of farming for decades.

Now to those of you who are aware of GMO's and say hey they are a good thing, no one has ever been harmed by them. To you I say go out and find me the peered reviewed food studies that have been done on humans (or even rats) You will first find only one short term inconclusive study has been done on humans and most of the other feeding studies either have problems in protocol or the subjects are getting sick and dying from eating biotech corn, soy, cotton seed and canola (but the industry surpresses such findings so they are quite hard to find). You will also find a growing body of peer reviewed evidence that says yields are down, environmental damage is up and more RoundUp™ has been sold since the intro of RoundUp ready crops (so much for the argument that GMO crops use less chemicals and yields more than non GMO crops)

But I digress, dear reader, this post is about Fedco. So Fedco has dropped a lot of varieties, many of which we have been using for years. And that has gotten me to think about what we grow and why. In the beginning we grew a lot of heirloom crops (an heirloom is any plant that is Open pollinated (OP) -i.e. a seed from two parents of the same variety that yield saved seed that comes back true to the parents-and has a good story/background history). As a matter of fact about 90% of our crops were heirloom the first couple of years. But we found that the buying public, especially if they are not well educated foodies, find the heirlooms strange and not worth eating (much less buying). Our bottom line was bottoming out with the heirloom veggies so we decided over the years to drop more and more of them and replace them with hybrids. Hybrids are the result of two (or more) parents of different varieties. The plants are generally uniform and often, but by no means always, better yields . Hybrids have been around for about 75 to 100 years and are really the first stab at genetic engineering with crops (but unlike GMO's, sex is used in reproduction and the passing of genetic material). Seed saved from hybrids almost never comes back true and often the plants will not produce edible fruit. This makes the farmer beholding to the seed company. Since the farmer cannot save seeds from hybrid plants the farmer must buy seed every year from a commercial source. One of the things hybrids do a lot better than OP/Heirlooms at is shipping. OP's tend to be very delicate and will not stand a lot of handling and sitting in warehouses. They generally must be sold and consumed within a few days of harvest. Hybrids have been bred for decades to be able to withstand shipping and storage and can still look good weeks after harvest (granted all the nutrients and taste will be gone, but it will look good)

Over the past 2 or 3 years I have read research that indicates that OP/heirloom plants have a lot more nutrition than hybrid crops and since I am in the business of grow HEALTHY food this is something I pay attention to. The past several years we have been doing something like 60:40 hybrids to heirlooms. This season we will try for a 20:80 hybrid to heirloom. I know I will have to buy hybrid red tomatoes because too many people seem to like the tasteless red globes. But for every red tomato hybrid we will have 4 or 5 fun heirloom maters such as Persimmon, West Va Hillbilly, yellow taxi, Opalka, Brandywine and others I have yet to decide upon. Tomatoes is what got us going on heirlooms and seed saving about 11 years ago. And why grow red round maters when there are 1800+ varieties out there in all shapes, colors and tastes. There are purple, black, white, orange, yellow, striped and green tomatoes in the world. there are tomatoes shaped like grapes, pears, cherries, peppers. Some are sugary sweet some are sour, some are tart some are not. Knowing this I cannot in good conscience grow boring red maters.

Same with squashes. Hybrid zukes are tasteless and boring. But the heirloom zukes come in many colors, shapes and, for the most part, have great taste. Same with melons, peppers, corn, winter squash, etc..

So now you know a part of the game plan for next season-HEIRLOOMS
Posted by Lucy at 7:03 AM

Hi Lucy. I can't even remember how I found your blog - but I feel like I've found an old friend. Weird, I know. We too are the owners of an organic CSA, although we are just starting out.

It is so good to hear the news about Fedco - I received their letter last year with my seed order notifying us of the Monsanto buy out of Seminis. I was hoping I didn't have to drop Fedco as a supplier as I also love them.

Here's to sustainability! (raising my coffee cup, it's a little early for beer) Looking forward to following your venture.

p.s. can I link to your site on mine?

Hope you don't mind Lucy, but I was trying to see if I could figure out how to link to your website and it worked! If you would rather I not, just let me know.

Thanks for the comments. No I do not mind if you link to me. I'll return the favor whenever I figure out why the html on my page will not let me post more than 2 links.

Off to puruse your blog now