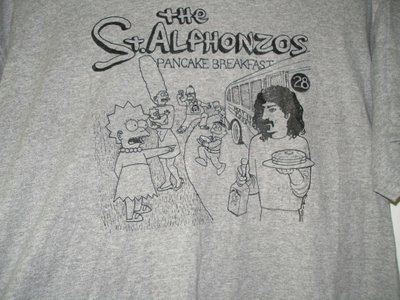 Saturday was a fun day. Went to the farmers' market bright and early and saw lots of people that I had not seen in a while. because it was cold and rainy the market was not well attended and we did not sell out by any means but it was still a fun market. And to make the market even better I was told right at the end of market by Shannon, a former intern of ours and all around good flower child, that St Alphonso's Pancake Breakfast was being held at Camp America that very day.

Alphonso's is perhaps the best hippie party on the face of the planet. Named for the Frank Zappa song,"St Alphonso's Pancake Breakfast" this is the 28th year for this party and I believe the 23rd time I have attended.

This party was started in 1978 by an albino keyboard player named Dan Sell who lived in a desanctified church on N Elm St in Oxford, OH. The first party had beer, live music, drugs and everyone was instructed to bring a t-Shirt that would be silk screened with an image of Frank Z wearing some sort of pious gown and holding a stack of pancakes. I was not personally there (I would have been 15) but I happen to know most of the folks who were. The party grew over the years and and had to be moved outside of town. It has been held at at least 15 different rural venues throughout the countryside in Butler, and Preble counties in Ohio and Union county Indiana. Originally it was held the first Sunday in April (unless that Sunday was also Easter) as a nice spring kick-off event. There was always a commemorative T-shirt to be bought, the beer truck, lots of great live music played by popular local bands and the green pancakes (yep pot filled pancakes that some years were like eating a hunk of pasture in half baked dough. MMMM Pancakes...) topped with Jim beam spiked syrup. For the first 15 or so years the party started around dawn and ended at dusk. Lots and lots of half drunk, tripping hippies would set off on their pilgrimage to the country for a full, wonderful day of partying, come rain, shine or snow (I gotta say my favorite Alphonso's had to be the one held at Chinaman's farm south of Oxford. It snowed most of the day but no one cared.). But as the original partiers got older, some stopped coming and a new crop of hippies took over the care and feeding of the party the start time got later and later in the day. But the end time stayed at dusk until this year. Now the party goes from noon to 1am.

I did not go last year as it was held in a park in Hamilton, OH and they charged admission to get in and it was a rainy day. It just seemed to be the wrong Karma for the party which has always been a free affair (except for the t-shirts which helped to pay for the event and the yellow hat that used to be passed around for donations to pay for whatever the t-shirt sales did not cover). But this year Alphonso's was held at camp America in Preble County where it had been held in 2004, the Cicada year.

Eugene and I set off for CA around 5pm (by far the latest I had ever gone to one of these) and did not know if we would know anyone there but figured we should at least buy a couple of T-shirts and see some bands. Got there and within minutes I had run into a friend from highschool, than a I saw Crazy Rick who lead me to the Mackeys who told us the kegs were dead but the had Wiedemann's in their minivan. Grabbed some brews and wandered back to the building where the bands were playing and ran into Beth Hannon, a woman I've known since High School and she informed me she had just bought Camp America which I find to be way cool. And she got a real deal on the place as it was sold at a sheriff's auction about 4 weeks ago. So it looks like Alphonso's has a home for a while.

With each meeting of a friend I got a hug and ended up the day with about 20 hugs (yay).

Saw lots of muddy dreadlocked hippies floating on their own grooves (okay, like LSD and other psychotropics-I dunno what, as my days of tripping are well behind me). Watched a woman who did the exact same dance to every song the bands played. The music could be a space jam, heavy metal, blues, jazz, technofunk-it didn't matter she did the same dance to all. I was amused.

My friend Chuck who had been travelling gave me a way cool fridge magnet that sez: "Stop Using Jesus As An Excuse for Being a Narrow Minded Bigoted Asshole" with a nice pix of Jesus with his sacred heart.

Around 9pm we decided to go home since we had a pack of wet and hungry dogs to deal with and it was getting late for us farmers. It took about 1/2 hour to get back to the car because we kept running into people and talking but finally we were able to break away.

I gotta say the party is different from when I was a wild 20 something child (okay it really isn't that different, I am. I drank a couple of beers and went away pretty gosh durned sober. There were plenty of fucked up happy people. I was not one of them) but it was one of the best Alphonso's I have been to in about a decade. No one got hurt, no fights broke out, no one called the cops-it was a good time, despite it being cool and rainy.
Posted by Lucy at 12:47 PM

Your blog is cool and funny. I am a quasi market farmer who grows mostly flowers and some vegetables in NC. I recently bought some land and hope to expand my growing into a full time job at some point. Good luck with your new farm and this seasons business. Keep posting!

I was at the St. Alphonso's at Chinaman's farm 20 years ago (give or take)! I remember it being really fun. I think I sat on the rafters in the barn with you and drank beer out of a plastic milk jug. Was that you? I'm not sure anymore; it was a long time ago and I drank rather a lot of beer out of that milk jug that day. Thank you for jogging a nice memory for me.

It sounds like you are really doing well and enjoying life. I'd like to go to another Alphonso's someday, too.

That very well could have been me drinking beer out of a gallon jug up in the barn. Chinaman's Alphonso's was about the best one for me despite the cold snowy conditions. I remember peeing out behind the barn with a few other women and freaking out some men. I remember sitting with Heidi Arnold and discussing infinity as a noun.
Good times...

they have never charged for st als and it has been at camp america for the last 4 years!

This is the top Google link when you search for it, by the way. A sign of how down-home and word-of-mouth this event is.

I have seen many an event cycle through the waves of tiny beginnings, growing reputation, and then usually destruction due to crowd logistics. Sooner or later someone wants insurance and the whole thing falls apart. This event is amazing because it has persisted. By the end of my days in Oxford- around 2000- it had become a frat brawl.

For a while there the sheriff forbade driving to the event and a bus would pick you up uptown and take you to the party, then bring you back. Perfect for townies & Western burnouts. The thing I remember about this party was that the hippies came out of the woodwork- I'd never seen so many in all my sheltered Oxford life. I also remember seeing a redneck piledrive his friend, and then they were crying and saying "I love you man" ten minutes later. -Jon-Richard Little

What an awesome way to find out about the history of this local festival. Doesn't get much better than going to Google and finding personalized information on a local blog.

If you can't notice by the sudden timing of all these comments, the party is this weekend! Here's to keeping a good vibe and some good weather for the weekend!