We recently got 18 laying hens in short noticed and we were not at all prepared other than we had some chicken food, fencing, feeders, waters and chicken tractors designed for meat birds. So we used what we had and Eugene quickly put together a mobile chicken coop out of stuff lying around the farm. We introduced the hens to their 2nd new living situation in under 2 weeks and they liked it and settled in and all was well for about 3 weeks.

The weather was mild and mostly dry with low winds but as Christmas neared rumors of a winter advisory started circulating on the weather TV stations and websites. As time marched on that advisory became a winter storm watch, than winter storm warning. Than about 24 hours before the snow hit us a Blizzard warning was issued.

A Blizzard! What to do about the chickens as we knew from past experience chickens do not like snow at all and high winds were predicted and that meant that snow would get up into the mobile coop itself as it has hardware cloth for flooring to allow the poop to fall to the soil below and fertilize the ground. A great concept in any weather but snow, especially a blizzard.

So what does a farm that specializes in season extension using simple hoop houses do when a big snow is predicted? Put up a hoophouse over the chickens and their mobile laying tractor plus two other smaller tractors, that what. And it worked. The hoophouse has kept the snow and wind off the hens who have stayed warm and dry and quite happy walking around eating grain and the greens we harvest for them out of hoophouses that have greens growing in them.

This has been an excellent and cheap solution to heavy snow conditions for us. 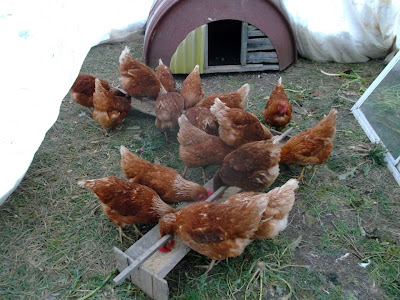 Getting Ready for The Boxing Day Storm

It is Christmas today according to both the Christian religious calendar and the capitalist economic calendar and that means for many people around the world, a day off. But it is not a day off for the Boulder belt farmers. We did try to take the day off, we really did. I even postponed the Winter Share pick ups that should have happened this week to Feb 5/7th. But the weather has dictated that we work today, at least for a few hours harvesting and washing rutabagas, carrots, parsnips and golden ball turnips for the Winter share pick up that will happen next Thursday January 3rd. This is because we are now under a winter storm warning that predicts we will get at least 6" of snow tomorrow. A Boxing Day Storm. And 6"+ of snow means it will be quite difficult to harvest anything and about impossible to get at the root crops. And the mice and voles will get quite active under all the snow cover and will likely start eating the roots, especially the rutabagas and turnips


The roots will be topped, we will save the greens for the laying hens (that's right we have layer again after a 9 year absence) so they can have greens even though there is snow on the ground covering up everything. Than they will be washed and put in the fridge for safe keeping.


Merry Christmas!
Posted by Lucy at 1:02 PM No comments: