It is the last morning of winter (as far as the position of the sun in the sky) but it has been spring here for weeks.

We did the March edition of the Oxford Winter farmers Market and sold out of everything but garlic, garlic powder, dried beans, catnip and dried herbs.

and around 95% of it sold in under 1 hour. That was some crazy selling for us, constant taking orders, fulfilling orders, making change and refilling the baskets. Eugene and i were busy little beavers.

than it was over, we had few things left on our table and an hour of market left to go.

So I went shopping and bought 4 packs of nitrate free Organic sauasages from the Filbruns and than got ground beef from Hokebee farms and stew beef and a roast from Reserve Run and 5 pounds of honey from Scott Downing, the Apple Man who sets up next to us and sells it cheap ($15!).

Eugene bought me a new mixing bowl from the potter who was set up next to us. He had broken a favorite mixing bowl of mine, an 8" Roseville bowl my sister gave to me years ago. I have several 10" Roseville mixing bowls but only one of the 8" bowls. And I discovered it is very hard to replace this 8" bowl with a Roseville bowl or anything not made from plastic. Or at least it was until last month at the farmers market I saw that this potter (I really should learn his name as he has been selling at OFMU for 2 or 3 years and now I own one of his pieces) has a cobalt blue 8" bowl. The bowl is everything I wanted-locally made, ceramic, 8" and blue.

Ended the day bartering 2 leeks and a bag of beet greens for some bread with Pia Terranova. She wanted to just give me the bread but I had 2 leeks and a single bag of greens left over and because she took those items we could turn off the commercial fridge when we got home

So all and all a fantastic market
Posted by Lucy at 5:04 AM 2 comments:

It's windy and the wind is trying to blow the row covers and plastic off, delaying onion set planting

A Brief History of Season Extension

I just read an article on the wonders of winter spinach in Illinois and the author of the article seems flabbergasted that one can grow anything in winter. Read this story here

I love newbies to the local winter growing scene, they are so cute in their wonderment and surprise that we can grow through winter. Funny how we rarely consider how people lived through winter 200+ years ago before had canning, refrigeration and other modern conveniences we have enjoyed for the past 100 years or so. But obviously our species was growing and eating through winter or we would not be here today


The Roman gardeners used artificial methods (similar to the greenhouse system) of growing to have it available for his table every day of the year. Cucumbers were planted in wheeled carts which were put in the sun daily, then taken inside to keep them warm at night.[3] The cucumbers were stored under frames or in cucumber houses glazed with either oiled cloth known as "specularia" or with sheets of selenite (a.k.a. lapis specularis), according to the description by Pliny the Elder.[4]

The first modern greenhouses were built in Italy in the 13th century[5] to house the exotic plants that explorers brought back from the tropics. They were originally called giardini botanici (botanical gardens). The concept of greenhouses soon spread to the NetherlandsEngland, along with the plants. Some of these early attempts required enormous amounts of work to close up at night or to winterize.

So you can see we have had winter growing for a long time. Read old gardening texts and they talk about cold frames, hot houses, using compost to heat an area. Not to mention, erecting walls around the garden and enclosing it thus making a micro climate. All these things have allowed people to grow where there is winter for a long time. Granted most the food consumed in winter back in the day was dried-meats, grains, legumes, herbs, fruits, etc.. but people also grew some greens to get fresh food in the diet when it was scarce.

People also foraged for early greens starting when the snows melt. Take a look at the ground right now where there is no snow in the northern hemisphere and you will see all sorts of edible shoots-dandelion, chicory, chickweed, henbit are all growing here on Boulder belt Eco-Farm. And that is what is growing with no protection. The weeds (and cultivated plants) inside the hoop houses are growing fast. And remember we do not heat our structures but the protection the sheets of plastic give is more than enough to allow spectacular early growth.

The article talks about growing spinach in a hoop house and you can do that but we have found that spinach is so cold hardy that it does not need all the protection. A medium weight row cover will also do the trick. We planted 10 beds of spinach last fall (October, I believe) and we have been harvesting it since January (weather permitting-if there was more than 6" snow covering the beds than we could not access it. But it was quite happy under its' snow mulch and just waiting for better harvest conditions). We also have been growing cold hardy crops in our hoop houses like arugula, raab, lettuce, leeks, beets and spring mix (which is a mix of lettuces and mild mustard greens this winter as well.

This will be our 14th year doing so. And we do not use any fancy techniques to do this. Simple hoop houses which are literally metal conduit hoops with UV stable 6 mil greenhouse poly pulled over top and the edges secured in trenches dug into the soil and than the edges covered with said soil. I suppose our ancestors in the 13th century would say we are using very high tech materials as they would certainly consider the 6 mil UV stable plastic sheeting to be extremely high tech. But in the 21st century not so much. Instead in our century we are amazed at winter growing.

We marvel at locally grown spinach in March, Spring Mix before spring and yet this was something our ancestors took for granted. We have so much to learn from them, especially if we want to return to a sustainable local/regional food system.
Posted by Lucy at 5:47 AM 2 comments:

Winter is the time to clean up beds of perennial plants. We took a nice morning in late February to start cleaning up our blackberry beds. What we did was cut out all the dead canes that produced fruit last year. Next we have to get the primocanes into shape bit that is work for another day 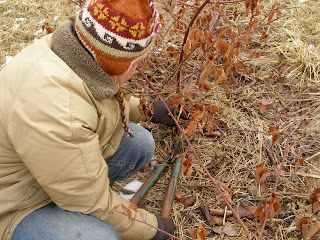 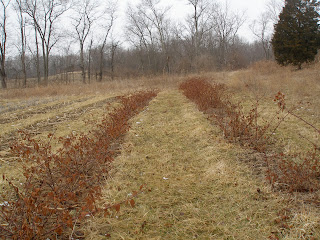 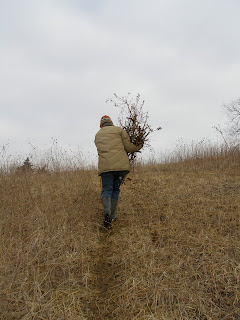 Carrying the dead canes away. We never leave the debris behind as that can lead to pest and disease problems as well as clutter which can badly impede work efforts 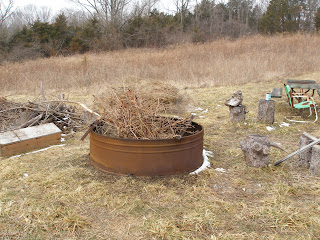 The final resting place for the dead canes. The burn pit where they will be lit on fire and all the potential pest and disease problems will go up in smoke
Posted by Lucy at 7:45 AM No comments: 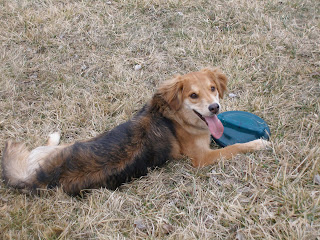 We have a new farm dog, Tilly. Like all of our dogs and cats, she is a rescue. She is under a year old, female and seems to be a mix of chow, some sort of shepherd (sheltie, Aussie, Shetland sheepdog?) and perhaps golden retriever or maybe beagle (or maybe both). She is what we used to call a Heinz 57.

She arrived on the farm on Sunday afternoon after a phone call from our buddy Rockhead asking if he could bring this dog to our farm. He said he was at Marge and Gary Glaser's house (Marge has been a staunch and very long time supporter of us Boldarians and is in the process of building one of the most incredible houses I have ever seen. Gerhy and Gaudy, I think, would like the place), scouting rocks and clay for the house project and this dog wanders into their lives. Mark (Rockhead) could not take her as he lives in a house full of animals (dogs, foxes, owls, opossums and other wildlife-his SO is a wildlife rehabilitator, among other things and has made it clear that no one brings more dogs into the house as they have several). Marge didn't want her so the two of them thought that we might take her.

Seeing as how we have needed a dog since Betty bought the farm back in August of 2010 we said yes. And thus this medium sized yippy dog arrived at our farm. Yes yippy as this is what she does when she is nervous or excited or wants someone to toss a frisbee. She and Nate got a long very well from the start. The cats were not at all happy with this change in our lives but once they found out she was not going to kill them they were kind of okay with the idea, though they both lived up stairs for a day until Tuttle could no longer stand being away from us and came downstairs and braved the new dog.

Tilly was into chasing Tuttle until Tuttle became a ball of fur claws and hissing teeth and let her know in no uncertain terms he does not want her to touch him much less get up in his face. Now she keeps a respectful distance and has learned we do not want her to chase him through the house (though I have noticed he is beginning to encourage that behavior and seeing as how they are about the same age I suspect within a few days they will be fast friends and playmates).

Tilly loves playing frisbee and is one of those dogs that will leap high into the air to catch the disk. She bonded quickly with the Nylabone® Frisbee® we have had for over 5 years and that none of our dogs have had much interest in playing with in the past. Arlo when he was younger like playing Frisbee® but as he got older he lost interest (and his sight. There might be a connection there, hmmm) and Nate, Dani and Betty had zero interest in the thing. So it is all for Tilly.

A short Video of Tilly (at this point she had no name) meeting her new best friend, the Nylabone® Frisbee®

As I mentioned, Tilly has some sort of shepherd in her and she has already exhibited a strong desire to herd. I have never owned a herder but I know they are valuable on the farm especially if one has livestock. Perhaps we will get her some sheep in the future but for now she will have to be content with herding cats.


We have been impressed with how quickly she picks up on things. She learned her name in about 2 minutes. She has already learned not to jump on us (most the time-it took Nate's hip dysplasia to get him to quit jumping and Betty had not learned this at the time of her death, despite months of lessons and telling her/showing her "down" hundreds of times a day).

I have a feeling Tilly will make an excellent farm dog
Posted by Lucy at 6:13 AM 2 comments: