The Compost has Finally Arrived

Back in late February we called up Dan Young and put in an order for 6 yards of compost. Told him we needed it by late March. Around the 3rd week of March he called and said he could send some down that day. We said we had plans away from the farm but we would be there the next day. He said he would send a load to our farm than. The next day came and went and no compost. A week went by and still no compost. A month passed and still no compost or any word from Mr. Young.

Than two days ago I find a message on the answering machine from Dan. He can deliver compost that day. So I call back and leave a message saying that would be great. The day passes and no compost arrives. Than around 4pm yesterday Dan calls back and says a truck is on its way and will be at the farm in 1/2 hour. JOY!. 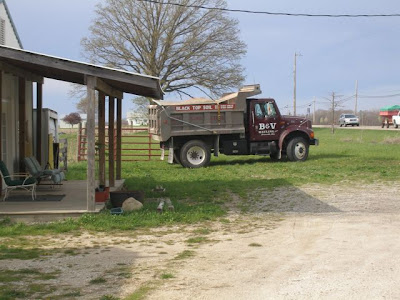 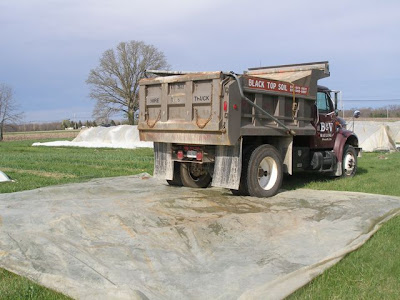 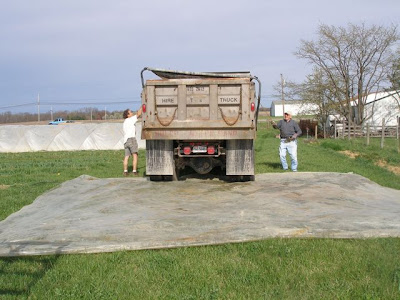 Eugene and the truck driver loosen the tarp 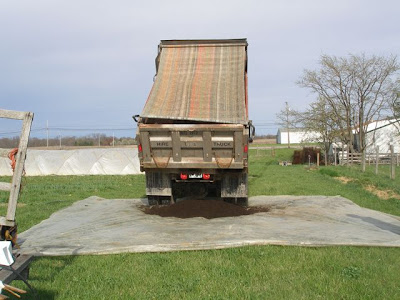 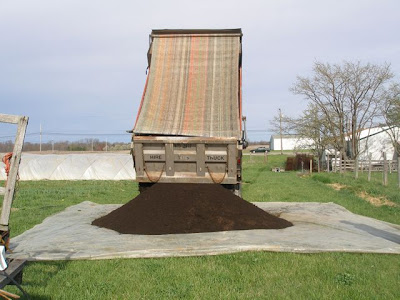 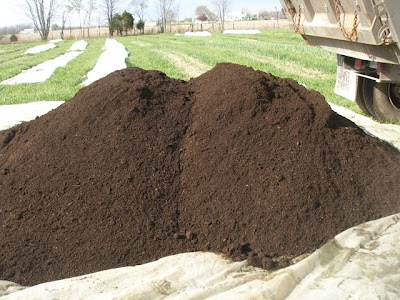 Soon we have a big ole pile of compost dumped next to the market garden on a big piece of plastic
Posted by Lucy at 2:29 PM No comments:

The asparagus is coming in and I have also begun picking strawberries, though I don't know if there will be enough to sell by Saturday. The hot, sunny weather today (it's 82F) should cause a lot to ripen in a hurry. Will have to play that one by ear. But asparagus we got, and it is really, really good

If I get out tomorrow morning before the winds pick up we should also have spinach, heirloom lettuce and maybe some scallions and leeks.

Today I am cleaning the store. So far I have washed the sales fridge and all the racks that go in it. Man, that refrigerator was dirty. the bottom was full of goo, dead flies, veggie bits and the walls had lots of black mold (which the GSE I used in the wash water ought to stop). The racks were also nasty and much harder to clean than the fridge box. But now everything is sparkly clean and more important sanitary. I am grateful to my restaurant exp for getting the opportunity to clean out a lot of nasty reach in fridges and walk-in coolers. Makes this job seem easy.

Next I am going to wash down the shelves and windows and do some light vaccuuming. After that put up some posters of various heirloom roots and veggies and than harvest more asparagus for tomorrow.
Posted by Lucy at 1:56 PM No comments:

after 19 years of accessing the internet via dial up modem I have finally decided to go with DSL. At some point around 7pm this evening my service will kick in and I will be able to surf the web comfortably. No more waiting up to 10 minutes for a page to load (I have literally vacuumed the living room floor in less time than it has taken for some things to load . No more hour+ hangs on the email because someone has sent me a 5mb attachment (that won't open too often) I can now watch suggested videos without the up to 20 hour download time (and the vast majority of these I delete). The photos on my website will now load all the way with no refreshing. I will be able to upload videos to this blog.

I am stoked about this upgrade in my life.
Posted by Lucy at 1:48 PM No comments:

I was all done packing the Farm Shares and went up to the garden to see what needed doing and noticed that some of the straw in the asparagus beds was tenting. This means something is growing up from under the straw. I saw a lot of thistle doing exactly that in the beds (but not from the thistle tainted straw, these guys are in their second year and will be dispatched when the time comes). So I investigated and the first tent yielded nothing but some asparagus beetle grubs and a dandelion, which I dug up and removed. I wandered down the beds and investigated another tent and found a huge asparagus spear. Wow! I start looking at other lumps in the straw and find over 50 plants with spears poking out of the ground. This is about a week earlier than last year. This is also their 4th year in the ground so they can be fully harvested. I am stoked!
Posted by Lucy at 4:21 PM No comments:

How to kill a Tick

So how many ways can one kill a tick here's my list in no particular order:
cigarettes, a lighter, matches, a magnifying glass on a sunny day, drop it in alcohol, cut in half with finger nail clippers, cut with a knife, cut in half with scissors. Drop in soap water, drop in the toilet and flush, bite one in two (I do not recommend this!), feed it to a fish, feed it to a hen, feed it to a guinea hen, pull it's tiny head off, put it in a glass jar a lid and leave it there for a while, a long while. Smash it with a rock (especially good with the bloated ones), grind with a mortar and pestle. Fold it in half. Soak it with gasoline and light on fire (rather extreme but effective).

Ticks may seem indestructible but heat, cutting, smashing, drowning and being eaten by birds are all effective ways of killing them without using toxic (to us mammals) chemicals.

Got any other ideas?
Posted by Lucy at 2:59 PM No comments: 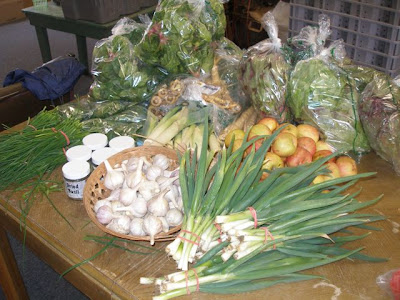 The food for 6 shares right before being divided up and put into bags. From left to right (1st row) we have chives, dried basil, garlic, scallions (2nd row) cilantro, leeks, apples (back) Spinach, parsnips & lettuce

Today is the opening of the Boulder Belt Eco Farm Farm Share Program. I am excited to get this program underway. The first week will likely be the week with the least amount of food and we still were able to get 10 items into each share. This week our members get Lettuce, spinach, parsnips, scallions, chives, cilantro, dried basil (cinnamon or Genovese), leeks, garlic and the last of the apples. Plus members get a newsletter with a recipe.

The past week or so the weather has been very nice-alternating sun with rain, warmish, a few tornado warnings (really, on Sunday evening 2 Tornado warnings went up for Preble County. one right after the other. Both Came right over top of the farm and property much ran out of steam than tried to reformed north east of us. We figure our Karma with nature-what with us farming sustainably and our reverence for all the critters on the farm (we protect even the wasps, snakes and spiders because they are excellent hunters for us)-kept the storms light and undamaging), general spring weather. But yesterday and today we have had cold, windy, snowy days. Not the best conditions to harvest but we were out in the snow getting scallions, chives and cilantro today because it had to be done. Harvesting for Thursday's group will be much more pleasent as it is supposed to be sunny and in the mid to upper 50's (about perfect weather, if you ask me).

In the coming weeks our members will see things like D'avignon radishes, snow peas, strawberries, arugula, spring mix and more in their spring shares
Posted by Lucy at 2:44 PM No comments:

Went out later in the day to finish the mulching and was pleasantly surprised to find all the other bales of straw that I used (one I did not use as it has the same green color of the thistle infested bale, and I did not need it) absolutely free of thistle. So I got the 11 asparagus beds I did not get in the morning all mulched and in some cases pulled out a lot of dandelion and clover. In another 3 to 4 weeks we out to start seeing spear.

It took me about 2 hours to weed and mulch 11 beds. It took me about an hour to mulch the first bed with thistle straw because I had to go over and over the mulch in the bed to get as much thistle as possible
Posted by Lucy at 6:08 AM No comments:

Thistle in the Straw

Well color me pissed off. We went over to a nearby organic farm to buy 20 bales of straw yesterday morning and got a good price at $3 a bale (most of the conventionally raised straw around here goes for $5 a bale). Took the straw back home and unloaded it in the market garden so we could start mulching the perennial beds this morning.

I got a fairly early start and broke apart a bale and started putting it down on an asparagus bed. Immediately I noticed thistle down and entire heads of thistle seed. Not good. I shook out a second flake of straw and found more thistle, lots more. Again, not good. Now I had a big handful of the stuff so I ran to the store and got a bag and put the handful of seed into the bag and continued to distribute straw over the bed and grabbing as much thistle down as I could.

Soon the winds went from fairly calm to about 15mph-nice stiff breeze, great for sailing or kite flying but not good for grabbing thistle down. After getting close to 1/2 bale on about 2/3 of the bed I gave up because I noticed thousands of tiny seeds flying to the north west. So now I have distributed lots of thistle seed to the NW section of the garden and I have a bag with about 1/4 pound of thistle seed which I figure could nicely seed a couple of acres. I still have another 19 bales of straw to deal with and because I have to seek and remove as much thistle as I can it is taking about 5x longer to do this job. But if I don't attempt to remove the seed than we will have a much worse problem of asparagus beds rife with thistle and many many hours wasted trying to control it.

In the perennial beds we cannot do a lot of hoeing (much less trying to dig up the roots) and a healthy crop of thistle could out compete the asparagus at worst, and at best make harvesting miserable.

Now I am wondering if we should continue to buy certified organic straw if there is going to be this problem (this has happened before). I mean it kind of defeats the whole purpose of getting organic inputs if they cause bad weed infestations and the possibility of having to use an herbicide to keep the problem in check.

For now I am planning on using this infested straw and will have to make a plan of attack for the thistle that will be coming up in the beds. I have found you can get rid of the thistle if you cut it down just as it goes into flower but that will not happen until next summer (2010) and so we still have to deal with this years thorny growth.

Like I said I am pissed off and mighty frustrated
Posted by Lucy at 9:49 AM No comments: