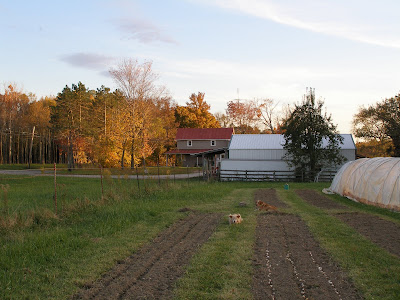 It took an amazingly short amount of time to get the garlic positioned and in the ground. Around 45 minutes a bed with 2 people laying out and planting 450 cloves per bed. Granted, the beds were ready to go. The tilling, raking and applying compost and other amendments would have added another 45 minutes to an hour of time. Though we did put down Sul-Po-Mag right before planting and that took maybe 2 minutes per bed. 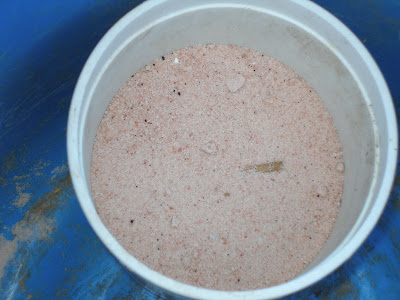 At any rate, between 4pm and dusk we planted over 1500 cloves of garlic. Our best time to date. We still have another 1300 to put in whenever it decides to not rain and we get a good day for planting root crops. 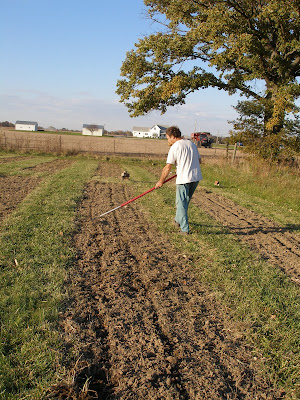 Eugene using a rake to mark out rows in the bed

Garlic needs to be planted in the fall. Usually we plant between Halloween and Thanksgiving but this year we had our first freezes in Mid October and the Sella Natura Biodynamic planting calender we use indicated that Tuesday afternoon and evening was a terrific time to plant root crops. So Eugene spent the day harvesting potatoes and doing the final prep on the garlic beds while I got the farm share stuff together. Than around 4pm I went up to see where the garlic planting was headed. Saw Eugene was just beginning to poke the first garlics into the ground and so I grabbed a trowel and started doing the same. 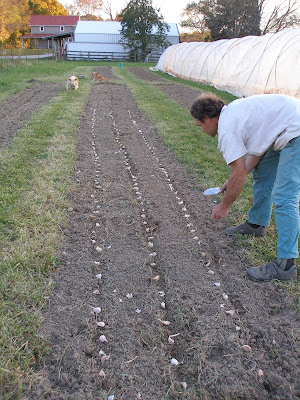 Laying out the garlic. This bed is finished and ready for planting.

While we were planting our garlic crop our neighbors were taking out their soy bean crop. The difference between how we farm and how they farm was striking. We were doing a human scale farming project. Our tools were a couple of buckets, some Sul-po-mag and garlic. They were doing and industrial machine scale farming project. Their tools were a combine with a bean head, a tractor with a gravity wagon and a semi tractor trailer. They were covering lots of acres (I believe the field next to us is 25 acres) while we were covering a small space, maybe 800 square feet at most. And yet we will likely net more money from our small space in garlic than they will on that 25 acres. And we do this having used a small fraction of the energy used in the industrial machine scale farm project.

Took a break after one bed and found that we had been doing this job for under 30 minutes and at that pace we could likely get another 5 or 6 beds done before dark. Drank a beer and sat around for 20 minutes breaking up German White corms into individual cloves because we felt we could plant another 6 beds before dark in 1.5 hours. After a few minutes we realized we really had time to do only 3 more beds as we realized that we had not accounted for laying out the garlic. That that task can sometimes take almost as long as poking the cloves in the ground. Plus we did not have enough garlic prepared for planting to do 6 beds. 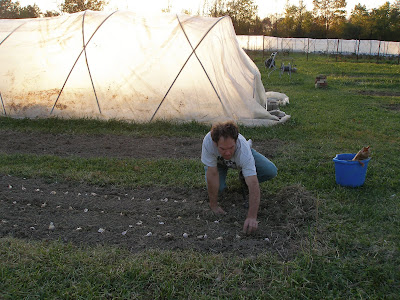 Planting the Music at dusk. This was the last bed of the day.

So we headed back up to the garden and finished up the Persian star and than did the Purple Glazer and Music. Plus we finalized where the 3 beds of German white and the bed of Shvlisi will go. 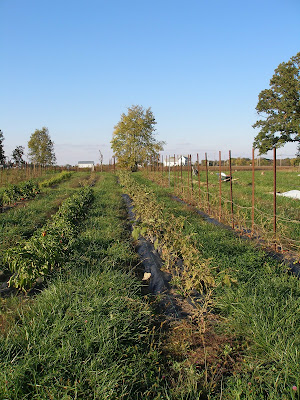 Prefrost peppers and eggplant
Got back from the farmers market Saturday afternoon with every intention of relaxing for the rest of the day (farmers markets really take it out of you) but than realized that the weather prophets had issued a frost warning for Sunday morning. That meant we had to do something about what was left of the summer garden. The tomatoes and eggplant are pretty much over except the late tomatoes that in theory are in a hoop house but in fact are not (they have a hoop house frame over them but no plastic on the frame as Eugene did not want to dig in the plastic knowing that he would in all likelihood move the house to another crop such as broccoli or kale) but we had a lot of peppers. 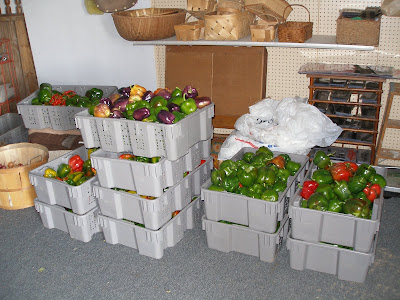 The (probably) last pepper harvest. That's around 400 pounds of bell peppers
I have been picking the peppers green with just a bit of color all summer. I have discovered that peppers, like tomatoes, will ripen up off the plant just fine. And by harvesting them early, the peppers do not get hit badly by bugs or disease. Instead of losing 50% to 80% of the peppers when left on the plant to ripen I now lose under 25%.

So it is now around 3pm. We have eaten lunch, unloaded the van and put away everything from market and most weeks we would be preparing for a nice afternoon nap. But as i mentioned, the weather service was predicting frost Sunday morning. So we had to forgo the nap and go back to work. We started with the peppers. we took out 6 crates and piled them high with mainly green peppers. That took about an hour with both of us working.

Next we were on to the green beans and haricot verts. They needed to be harvested than covered with row cover. We got under 5 pounds of beans from both beds.

Next the spring mix and beets beds needed to be covered. That took very little time as the covers were already there. They just needed to be pulled over the hoops and secured with rocks. But we realized the broccoli also needed a cover. Granted, all these crops can take cold conditions but they do so much better if they have protection. So Eugene found a cover for the broccoli and put it over top of them. 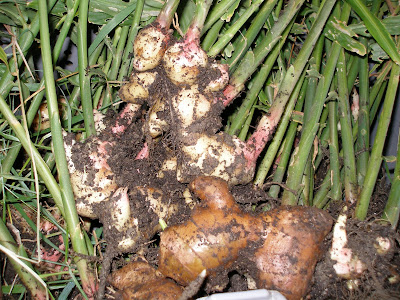 Freshly harvested ginger
While he did that I harvested the ginger. Yes we decided to try to grow ginger in SW Ohio. And it worked decently. But ginger does not like temps below 50F (the poor plants had to deal with a lot of nights in the mid 40's). I figured 33F would kill them so I decided to dig them up and bring them inside. Now we have a lot of ginger plants that need more time in the ground to make more ginger. And we have about 4 ounces of finished ginger. While I like the idea of local ginger I think it makes a lot more sense to buy the imported stuff if you use a lot of ginger. Because ginger requires a 10 to 12 month growing season and needs to temps to be above 50F (I suspect 85F is where is it happiest) it makes no sense to grow this on any kind of commercial scale here in Ohio. I believe the carbon foot print of doing so would far out weight the carbon foot print of importing it since a lot of heat would be required in winter and that heat would have to be more than passive solar. That said it is great house plant. It is beautiful, smells good and if you can keep the plant alive (which is pretty easy) for more than a year you can harvest your own ginger and divide the rest of the roots to make more ginger plants.

So at dusk we had the garden ready for frost. We were exhausted and went in the house to eat and eventually go to sleep-nothing like a 12 hour day of hard physical work to make you feel tip top. The next morning I get up and find that the low temp is no where near freezing, it is 37F.

Now we are ready for cold weather in the market garden. Bring it on Nature, bring it on.
Posted by Lucy at 3:30 AM No comments:

Eugene decided this was the year to plant and grow peanuts so he bought 2 pounds of seed (raw) peanuts and planted 1.5 rows of them in the bottom area back in late May. Yesterday we dug them up along with a lot of big grubs (which will become fish bait) and brought them up to the barn to cure for the next 3 to 6 weeks. It was interesting harvesting the plants. Many were still flowering and developing more pegs that will eventually become peanuts. many plants had scant few peanuts at all and others were loaded. We found that grubs like peanuts, perhaps more than potatoes as we found a lot of grub eaten peanuts along side potatoes that had older grub damage but very little new damage.

Peanuts are easy to harvest. All they need is a spud fork to gently lift them than a gentle shake to get the soil off and they are pretty much ready to by cured. 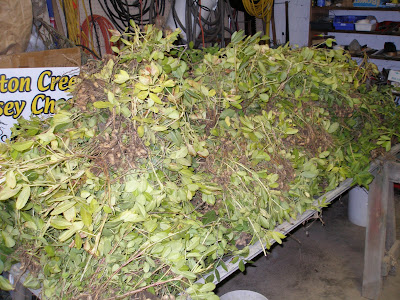 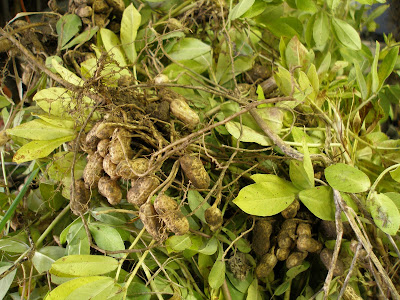 A close up of the pegs (peanuts)

The peanuts are not big like they would be if they were grown further south but if we can get them to cure without molding they should be really good boiled or roasted.

Right now they are sitting in a big pile on an old screen door in the barn. The plan is to gather them up into groups of 3 to 5 , tie the plants together and hang them up somewhere in the barn to continue curing. Kind of like what we do with garlic. It would be easier to lay them out on other screens but at the moment we have onions finishing up their curing (most are done) and lots of potatoes curing where we have removed and cleaned up the onions. So those screen are occupied for the next 3 to 6 weeks.
Posted by Lucy at 4:34 AM 1 comment: