How to Freeze Cantaloupe

Freezing melon is insanely easy to do. It takes no blanching or any other cooking. All you need are ripe or even over ripe melons, two knives, a chef's knife and a paring knife (my paring knife happens to be ceramic, that is why the blade is white. A stainless steel or carbon steel will work just as well), a cookie sheet or other flat pan, a freezer and some freezer bags (do not use storage bags, there is a big difference in results)

We use the frozen melons for several things-melon daiquiris, melon smoothies, melon ice cubes in drinks in the heat of summer (Eugene's favorite is melon cubes in iced tea spiked with lemonade), you can even use them thawed in fruit salad, though the texture is a bit different than fresh but the flavor is still there (unless you used storage bags instead of freezer bags, than the flavor may be off/stale from the freezer burn that will happen within a month of freezing. these should last at least 9 months in your freezer.

New York—The eighty-three family farmers, small and family owned seed businesses, and agricultural organizations, including the Ohio Ecological Food and Farm Association (OEFFA), challenging Monsanto's patents on genetically modified seed filed papers in federal court on Thursday, August 11 defending their right to seek legal protection from the threat of being sued by Monsanto for patent infringement should they ever become contaminated by Monsanto's genetically modified seed. The Public Patent Foundation (PUBPAT) represents the plaintiffs in the suit, titled Organic Seed Growers & Trade Association (OSGATA), et al. v. Monsanto pending in the Southern District of New York. Last week’s filings are in response to a motion filed by Monsanto in mid-July to have the case dismissed.

“On behalf of plaintiffs in Ohio and elsewhere who fear being sued for patent infringement if their fields are contaminated by Monsanto’s genetically engineered seed, our attorney gave Monsanto the opportunity to state unequivocally that they would not sue,” said Carol Goland, OEFFA’s Executive Director. “Instead, Monsanto’s response was to try to deny our right to receive legal protection from the courts.”

Dan Ravicher, PUBPAT’s Executive Director added, “Our filings include sworn statements by several of the plaintiffs themselves explaining to the court how the risk of contamination by transgenic seed is real and why they cannot trust Monsanto to not use an occurrence of contamination as a basis to accuse them of patent infringement.”

Plaintiffs Bryce Stephens, who farms in Kansas, Frederick Kirschenmann, who farms in North Dakota, C.R. Lawn, who is founder and co-owner of Fedco Seeds in Maine, Don Patterson of Virginia, and Chuck Noble, who farms in South Dakota, each submitted declarations to the court describing their personal experiences with the risk of contamination by genetically modified seed and why those experiences have forced them to bring the current suit asking the court.

As summarized by the accompanying brief filed by PUBPAT on the plaintiffs' behalf, “Monsanto's acts of widespread patent assertion and plaintiffs' ever growing risk of contamination create a real, immediate, and substantial dispute between them.”

Twelve agricultural organizations also filed a friend-of-the-court amici brief supporting the right of the plaintiffs to bring the case. In their brief, the amici describe some of the harmful effects of genetically modified seed and how easily GMOs can contaminate an organic or conventional farmer's land.

How to Choose a Good Cantaloupe

How to Choose a Good Cantaloupe
(this does not work for watermelon)
Smell the blossom end (opposite of the stem end), there should be a strong, sweet aroma

There should be no stem as a ripe melon “slips” of separates completely from the stem when ripe in the field. If there is stem than the melon was harvested green but could still be ripe if the aroma is strong and sweet.

Skin should have a golden cast to it and strong netting. green ribbing is common in many heirloom ‘loupes and is not an indicator of unripeness

The Gunn's Display. Note that shopping guy is now leaving the sale (upper left of shot)

Eugene cleans garlic. this is something we do at every sale as the garlic is ready to clean and it gives us something to do during slow times

Robert, a guy we sometimes get honey from, drops off a Doctors Carriage. 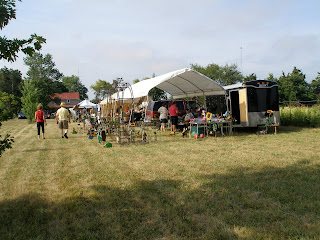 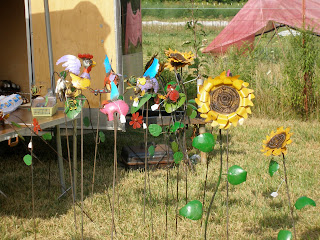 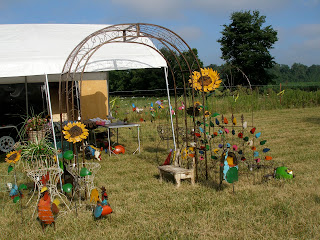 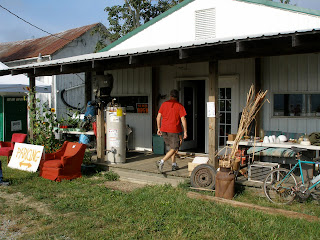 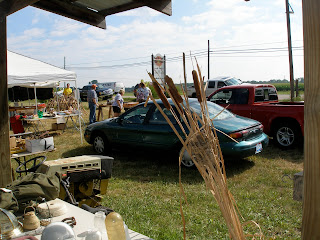 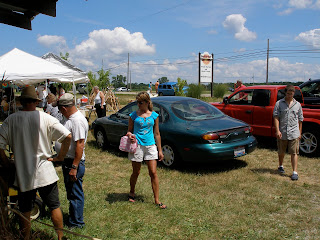 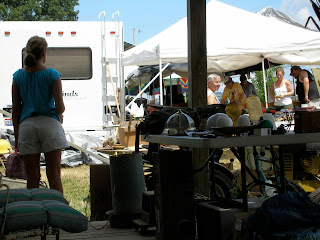 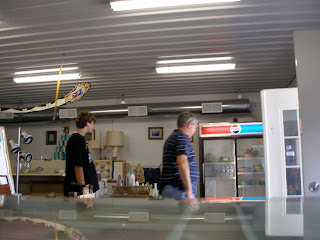 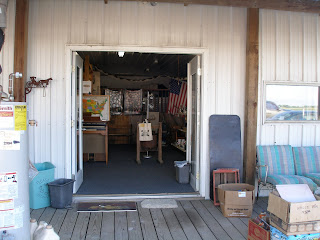 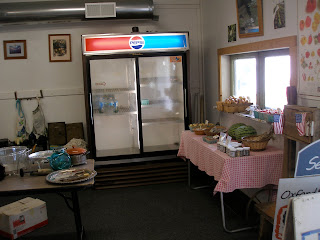 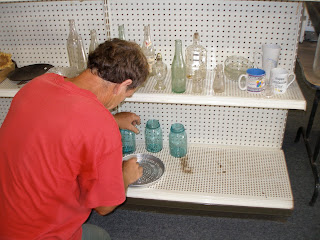 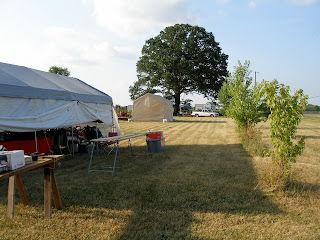