Now We are Merely Whelmed

Yesterday was overwhelming but today was merely whelming.

We had a lot of help from Sarah our twice a week volunteer for the next 3 weeks. She has an excellent work ethic and helped us get more garlic out of the ground and put up in racks to cure. We also got nearly 40 half pints of raspberries picked, all the shallots harvested, all the tomatoes tied for the second time, a hoop house frame removed from the tomato/pepper/basil beds it was covering about 7 weeks ago, catnip harvested and now Eugene is weed eating around garden beds and where the chicks will be come tomorrow afternoon. He'd mow but the mower is still without a belt and now is covered in drying garlic.

Oh yeah, and got a bunch of stuff harvested for the farm Share members. Boy, they got a nice share this week. Lots of nice food including green and wax beans, garlic, cabbage, zucchini, arugula, scallions, oregano, tarragon, snow peas, raspberries, strawberries and kale.

I would not say we are exactly caught up. But only because from now until sometime in September we will never feel caught up as there are always a 100 things to do, it seems. But things are under control and no longer overwhelming
Posted by Lucy at 5:34 PM 1 comment:

Life is getting overwhelming. Lots of big harvest jobs have all come in at once. Lots of mowing needs to be done so a belt on the mower had the excellent timing to break this evening. Though Eugene did get about an acre mowed before it broke. But now he will have to run into town to buy a replacement.

The raspberries are going nuts. I picked 20 half pints and that was maybe 1/3 of them. There will be more to harvest tomorrow. Along with beans, cucumbers, zucchini, strawberries and other things to harvest.

There is the farm share to deal with-A news letter needs to be written tonight or early tomorrow (tomorrow morning is looking more and more likely). I do have a food list in mind. hopefully the market garden is in agreement.

There is food to be put up for winter. I did get snap peas frozen but raspberry jam needs to be made ASAP and that takes several hours to do. I will likely be freezing beans in the next several days if I can find the time.

Beds need tilling for fall crops. Eugene says there are about 35 beds that need crops taken out or tilled in and than prepped for carrots, rutabagas, beets, etc,.

Tomatoes need tying. Fortunately I was able to get 2/3 of the tomatoes tied this morning-around 300 of them. They do look good and one already has a tiny mater on it.

To make life more overwhelming we are getting chickens tomorrow. 50 day old peeps that in 6 to 8 weeks will be in our freezer for our personal use. At least we are prepared for them. Have feed, a brooder tractor, feeders, waterers, etc.. The chickens will suck at least an hour a day from other tasks (but they are fun to have) which will continue the overwhelmed feeling we are having here.

At least the hot humid weather has been replaced by crisp cool weather. And we have a lot of good things to eat (If I ever get the time to cook)
Posted by Lucy at 7:02 PM 1 comment:

The raspberry season has begun. As usual it starts small and slowly builds until my life is consumed by red raspberries for about 6 weeks.

Today I picked 1/2 pint, tomorrow it will likely be 3x that amount and by this time next week I should be harvesting about 10 to 20 1/2 pints a day. By the end of the month it will be about 50 1/2 pints a day. Maybe more as the plants are a lot bigger this year and are loaded with berries that undoubtedly will get big because now that spring is just about over we have lots and lots of rain, which the berries need in abundance to be big and sweet. 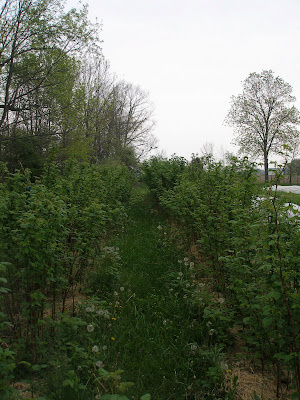 I took this photo in early May. At this point the canes were about the same height as they were last year. Since than they have put on an addition 2 feet of height and back towards the middle (where they already had started to lean into the aisle way) the canes have pretty much collapsed for about 25 feet. I have tied them up with bailing twine but it is still a mess back in there and will be a bitch to harvest but by no means impossible. And hey, they are thornless canes so no biggie.

I have been amazed at the variety of pollenators on these plants. Every kind of bee we have around here (at least 10 species) has been busy collecting nectar and pollen along with various moths and butterflies. I have noticed that the squash vine borers love the raspberry flowers and seem to get drunk on the nectar making them very easy to grab and squish. Normally it is hard to catch these moths as they are very fast and agile. This is something I really love about harvesting raspberries is watching all the activity in the canes. Spiders, daddy Long legs, flies, plant pests, preying mantids, wheel bugs, bees, moths, butterflies all either live there or come by to visit. I find evidence of great drama that has happened in the raspberry world. Husks of bug and spider bodies, a Daddy long legs sucking a plant bug dry (okay on that one I got to witness the drama), wheel bugs lying in wait for their next victim. For a bug nerd such as myself it is a fascinating world.

We have a small amount available at the store today and certainly will have a nice amount for the Saturday farmers Market in Oxford. The farm share members will start to see the raspberries in their shares starting next week.

What doesn't sell will either be made into raspberry jam (which will be available at the store eventually) or frozen for later use-mainly frozen rum drinks and yogurt smoothies.
Posted by Lucy at 1:31 PM No comments: 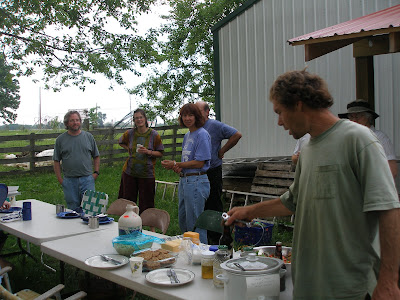 Glenn Platt, Patricia Platt, patty Latham, Jim Latham (behind Patty) and Eugene Contemplating the beer in his hand.
We had our first Farm Share Potluck and farm tour on May 24th, 2009. 4 of the 13 member families showed up so we have 12 people for the event.

The weather was iffy. Dark clouds threatened to rain on our farm tour and dinner (and this would not have been a bad thing as we really needed the rain-still do). But the rain held off.

At 5pm most of the people had arrived and we did introductions and set off to look at the market garden. A lot of member were impressed that we get so much food out of just 4 acres. This makes me think of the very first CSA farm tour and dinner we did about 12 years ago and everyone than was impressed with how big the market garden was-we were doing just over an acre and our members had it in their heads that were farming a much, much smaller space (like the size of a largish home garden).

Lots of good questions were asked and the Platt's son, Duncan, fell in love with the asparagus beetle larva as only a 7 year old boy can. He asked if he could collect some and we said take as many as you want. So he got a lot and later wanted to take them home-they stayed here.

After the farm tour we all sat down and ate the food everyone brought and drank apple cider and some of Eugene's home brews. Dinner consisted of a big salad I made, garlic mustard pesto over rotini, a nice paella

, cheeses from a small place in Wisconsin and cookies. 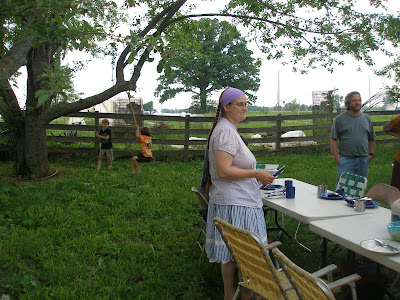 Genevieve O'Mally at the table, Duncan and Eric playing on the swing and Glenn looking off in the distance
There was lots of good conversation-we have an interesting and well educated bunch. The main topics were the farm, organic growing and local foods. But we talked about other things as well. 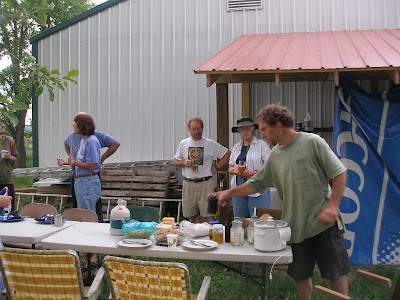 The Lathams, Art and Nancy Glidden and Eugene
After Dinner, Nancy Glidden did a short but sweet herb vinegar demonstration using our tarragon and her chive flowers. She supplied everything so we could all make a small jar of each kind of vinegar. it was fun, educational and amazingly simple. Now we all have yet another way to put up herbs for later use other than drying and freezing. Nancy Glidden giving her herbed vinegar demo. Genevieve, Patty and Jim are making their own vinegars

Our next farm share potluck and farm tour is June 21st, the summer solstice. If you want to join us for such an event all you have to do is join our farm share program
Posted by Lucy at 5:15 AM No comments: