Like most of the USA we have been inundated by snow. I believe we have had around 21" fall this month and we still have a couple of weeks and at least one more snow storm to get through. 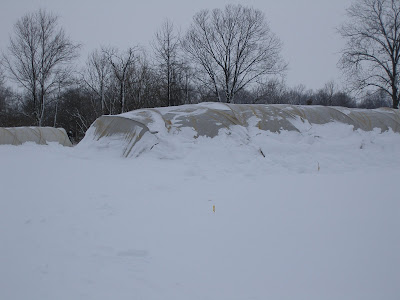 A hoop house covered in snow

So far we have not lost any hoop houses but it is not easy to get into any of them. The one you can walk to fairly easily has its' entrance covered with a 4' deep drift that extends about 10' out from the house. the other houses have no drifts in front of them but you have to slog through about 1/4 mile of beautiful powder in drifts up to 3.5' deep (and an average depth of 2'). So no one has been in them since I harvested greens for a customer and Eugene hoed beds the 4th of February. I suspect things are growing in the houses as the days are certainly longer and we have had several sunny days which means the hoop houses got above freezing (likely well above freezing).

Deep snow means you can't do a whole lot around the farm. We have started kale and lettuce seeds to go along with the onion, leek and shallot seedlings but other than putting the kale and lettuce germinants into 2" soil blocks as they germinate and watering everyone about every other day (over watering kills more innocent baby plants than anything else) takes maybe 4 hours a week. Fruit trees and brambles need to be pruned but at the moment that is an impossible task. We have to wait until the snow quits accumulating and starts melting. 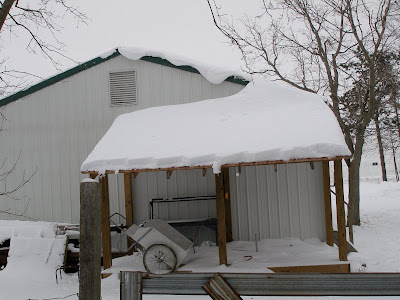 The packing shed in winter
The snow melt is likely gonna be problematic. We have over 10" on the ground and there are a lot of piles and drifts that are much deeper all over SW Ohio. If we are lucky we will get warmish dry conditions and the snow will slowly and safely sublimate away. But what is much more likely to happen is rain which will clear away the snow in a matter of hours instead of a matter of weeks but this will also cause flooding. I am rooting for the quick fix and possible floods, otherwise we will not be able to prune, work the ground or transplant early crops until well into March and than we will be facing an overwhelming task of getting a lot done in a very short amount of time without a lot of help. 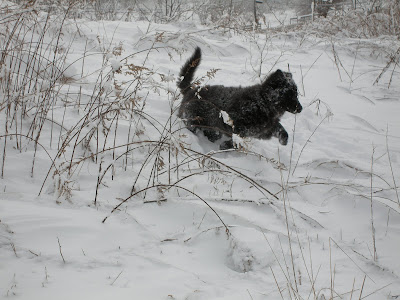 Betty in her element

The good news about the snow is Betty LOVES it. To her snow is the best thing since sliced bread. Little does she know that soon it will all be gone. of course when it goes away her bones and other toys will reappear and vole hunting will likely be easier. And there is likely to be a very healthy vole (and other small rodent) population this spring as deep snow is the perfect thing for small prey animals. iIt hides them from predators and it keeps them insulated from extreme cold and wind. 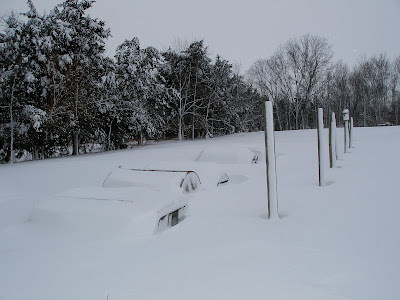 Chicken tractors just about covered by drifts. It's a good thing we don't have any right now, they would be miserable
The other good thing about the deep snow is it is keeping all our over wintered crops like the garlic and asparagus nice and cold. one problem with bare soil in winter is when if freezes and thaws you get frost heave which will heave bulbs and plants all the way out of the soil where they will die. A nice layer of snow stops this sort of thing from happening. Plus the snow will leave behind things like phosphates in the soil which are always welcome. Old time farmers call snow the poor man's fertilizer
Posted by Lucy at 3:46 PM No comments:

Here is a great post about organic farming data from Marion Nestle's blog Food Politics. It's got lots of USDA statistics, hits the topic of organic vs conventional nutrition and tells us who owns what in the organic realm.

Happy learning
Posted by Lucy at 5:43 AM No comments:

I guess I can take down all the anti NAIS stuff on this blog and the Boulder Belt Eco-Farm website because the NAIS is dead!

It looks like the USDA is moving in another direction.


"After concluding our listening tour on the National Animal Identification System in 15 cities across the country, receiving thousands of comments from the public and input from States, Tribal Nations, industry groups, and representatives for small and organic farmers, it is apparent that a new strategy for animal disease traceability is needed," said Agriculture Secretary Tom Vilsack. "I've decided to revise the prior policy and offer a new approach to animal disease traceability with changes that respond directly to the feedback we heard."


http://www.aphis.usda.gov/traceability/
On February 5, 2010, USDA announced a new, flexible framework for animal disease traceability in the United States.
Posted by Lucy at 6:07 AM No comments:

I had a spring mix order to fill for tomorrow so that meant going up to the salad house and seeing what there was to cut. So Eugene and I went up to see what's what and among other things, found buried in the area that is supposed to have onion seedlings a deer leg. Nice. 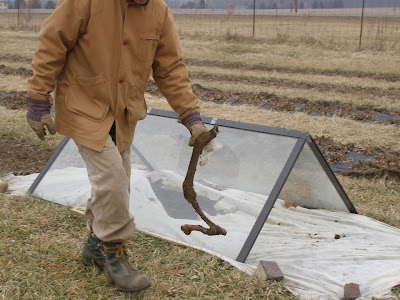 So he moved the leg out of the garden and we proceeded on to the salad house, went inside and found it nice and warm-a good 10 degrees warmer than outside. Nice conditions for the arugula, lettuces, mizuna, mustard and weeds growing in there.

We keep row covers on everything to keep the risk of frost damage down and so far this winter it has worked well. Though, in past winters, even with row cover and gallon milk jugs acting as heat sinks, we have had major damage to the crops. But not this year and it has been real nice to be able to eat fresh greens in deep winter. But using row covers means we have to remove them to work the beds 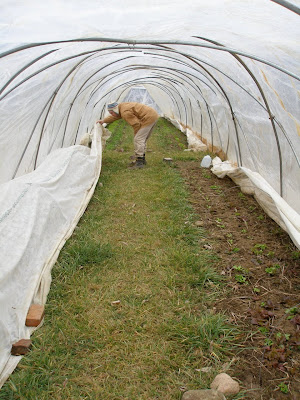 and That is exactly what Eugene is doing here, removing the cover over the arugula and mustard bed. And you can see the beds beyond him and next to him have no covers over them because I took those off so I could cut greens. 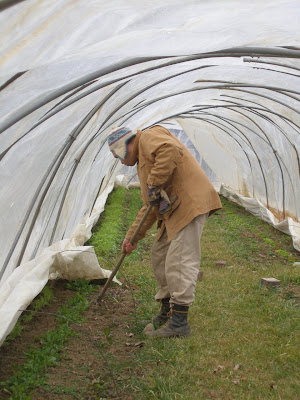 While I cut Eugene hoed. Even in winter we have to do some weeding. But the weeds and crops grow slowly so it is relatively easy to keep up with them. This arugula/mustard bed was not too bad and the soil was dry enough to work 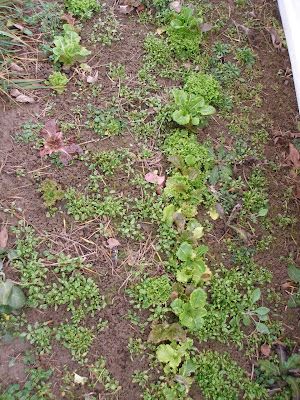 But this lettuce bed to the south of the arugula/mustard bed was quite wet and hard to hoe. But it has to be done before these weeds all flower and go to seed 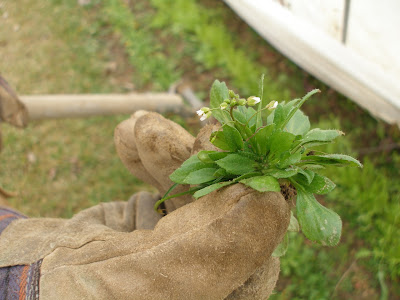 and you can see already some of the winter hardy weeds are beginning to flower. That is because in the hoop houses it is already late Feb/early March. 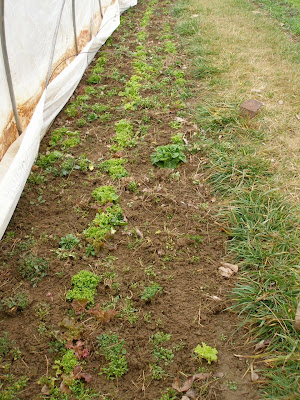 So for about 30 minutes we hoed weeds and cut salad. I harvested a pound of spring mix in that time. In warmer months I would have easily harvested 15 pounds in a half hour of cutting and within 10 days the cut beds would have grown back. This time of year it takes about 8 weeks for the greens to grow back. though this will change in a matter of days, by mid month the crops in the hoop houses will have broken dormancy and will start growing again. 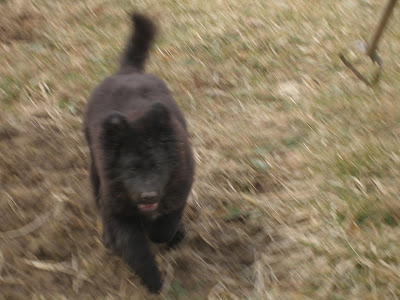 About the time we were all done with work in the hoop house and were debating whether or not we should call it quits or not (there was a little bit of hoeing that could have been done) betty makes the decision for us by appearing outside the hoop house-we heard a noise and the next thing we see black paws on the side of the house. Betty had escaped from the fenced back yard. how? We do not know. 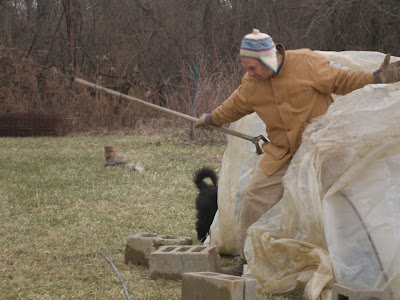 So we leave the hoop house taking our harvest and tools with us and see what Betty is up to. 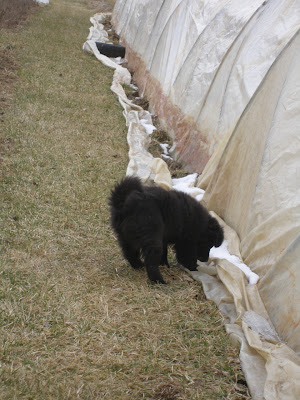 Betty is hunting mice because she remembered that yesterday she caught her first vole right out side this hoop house and she hoped to get more (and she will in the fullness of time). So We let her poke around the perimeter of the hoop house for a bit than eventually went back to the hiuse. okay Betty and Eugene went to the house and I went to the store to bagged the Spring Mix for tomorrow's order.
Posted by Lucy at 2:41 PM 3 comments: