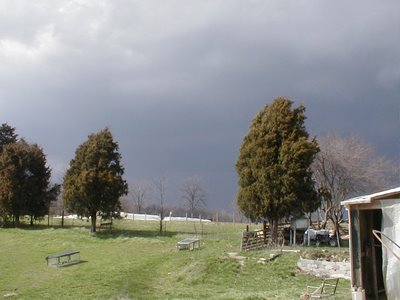 A shot from the Friday storms. The grass is a lot greener now than it was than. the boxes in the foreground are coldframes that were empty than but now full of brassicas and tomato seedlings.

It's been a busy spring day. It got up past 70˚F and was nice and dry. So Eugene and I finished prepping the plowed beds for the tiller. This meant squatting and heaving large chunks of sod back into the beds that the plow had placed in the aisle ways. It was a good aerobic work out but hard on my sciatic back. After a bit of dirt heaving Eugene got to tilling the beds we had just worked on and I worked on making mix for soil blocks and making soil blocks until I ran out of permanest trays.

At that point I got to inspecting the seedlings and noticed more mouse damage. The little F***s have now eaten several melon seeds, about half of the fat n sassy peppers seedlings (I hope there was enuff toxicity in the seedlings to at least give the rodent a good belly ache) and also has dug into the soil blocks displacing seedlings. I moved the melon flats to a shelf that so far the mouse/mice have not been able to get to and put a lot of things into the cold frames where they should be safe from marauding mice.

After lunch we set out to put in 4 flats of heirloom lettuce (marvel of four seasons, lollo rossa, nancy and rouge d'hiver. Okay, nancy is a hybrid bibb lettuce but the rest are all heirlooms and tasty). Eugene looked at the bed where we wanted to put the lettuce and decided 2 passes with the tiller was not enough and did a third. After he finished with that bed he did all the other beds that needed a 3rd pass (about 12) while I got the things together for the lettuce planting. To do the job right you need to have the plants, a bucket of compost, wire hoops for the row cover, row cover, rocks or bricks to weigh down the row cover, a rake to rake the bed and a trowel. So while he tilled I got everything together and brought it all to the work site.

Together we put down compost and than soil blocks with a lettuce plant in each and than started putting them in the soil. After planting the lettuces I watered them, put up the hoops and pulled the row cover over the hoops. Et voilà we were done with our second lettuce planting.

So the next thing to do was to check in on the newly planted cukes and zukes in the hoophouse. Not good. A vole or mouse had spent the afternoon while we were planting and tilling munching cuke and zuke plants along with some light arugula grazing. So we pulled the row covers off of the plants and thought about pulling the black landscape fabric off the ground because the little $#@@# like to hide and nest under mulch but than decided the weeds would over come the cukes and zukes so we left the stuff down. I think we need barn and field cats to control the rodents before they eat us out of house and home. All we have is Navin, a good hunter but the boy is going on 15 years of age and Trina who is clawless and does not know about hunting (we did not declaw her she came to us with her fingers already amputated). I sure wish we still had shiva around, he was a great mouser and voler. The dogs are into killing voles but they tend to dig after them and do more damage to the plants than the voles.

Now the sun is setting and it is time to do something about dinner
Posted by Lucy at 6:48 PM