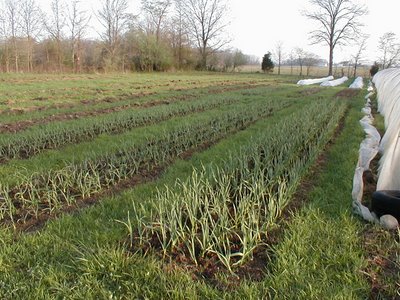 Heirloom garlics on a beautiful mid April Morning
It's been an good past couple of days.

Got a worker lined up for June this morning. She’s the younger sister of this year's market manager for the Oxford Farmers' Market Uptown.

Saturday went to the Talawanda Alumni FFA auction to see if we could score a produce washer. We got out bid on that but did buy a couple of peach trees that were put in that afternoon. We also went to the last Winter market of the year as customers, not vendors. that was interesting, everyone wanted to know where we were and why we were not selling (had very little to sell). It was a beautiful morning and lots of people showed up to buy things. It probably helped that earlier in the week I emailed into a call in show on WMUB about cooking telling about the last winter market. Several people said they had heard my comment read on the radio. Nothing like a bit of free advertising. I bought eggs, a loaf of bread, a bag of chard (I have been craving chard) and picked up the milk order.

We got storms Friday and Saturday nights and 1.5 inches of rain so Sunday not a lot got done, it was just too wet. Monday I made many trays of soil blocks, pricked broccoli and cauliflower into larger blocks along with some mystery peppers I found in a bucket of discarded small soil blocks (we recycle the soil blocks and sometimes they have seeds that were not germinating when they were in trays but will once they get covered by soil in a bucket). I was happy to find all these pepper seedlings. I need to replace the ones that the mouse/chipmunk critter ate. I just wish I knew what kind were. And I started 17 different kinds of flowers to be put here and there around the farm and Eugene put in about half of the onions we started in pots and cut up (chitted) the potatoes for the first planting of the year.

Today Eugene put the plastic over the 3rd hoophouse and is preparing ground for leeks and planting the 2nd succession of peas. Later on today we plan on putting in kale, cabbage and broccoli seedlings as well as the last of the onions in pots.

Right now I am waiting on the last rise of a loaf of maple wheat bread than into the over for it. So I blog.
Posted by Lucy at 11:41 AM

I had some critters once nibble on my pepper plants but they never got any further than the top third of the plant. I am hoping they didn't like the taste. It never happened again.

Those garlic beds do look tasty. Makes me hungry for growing garlic. I've never tried it although I really want to.