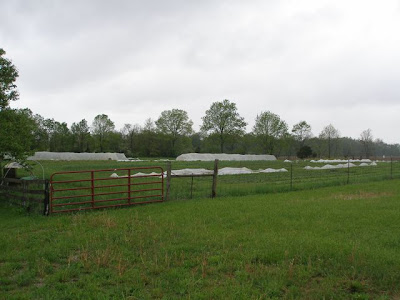 I have not posted many farm pictures lately so here is one I took last Sunday between heavy rain events. this is looking North west and shows 2 of the 4 hoop houses and a lot of row covered beds. Since I took that shot there is a lot of pea fencing just behind the fence and gate. other than that we have not done a whole lot with the market garden other than foliar feed, harvest and hoeing when the soil dries up enough. it has been too wet to till beds for tomatoes, peppers and egg plant or even to plant seed. And what seed we have planted in the past 10 to 15 days has pretty much rotted in the water logged soils.

At least our soils drain well as the market garden sits on the edge of where the last glaciers were so there is a steep slope on the south side of the garden which means we do not get standing water for more than a couple of days even when we are getting 5+ inches in a week's time. But, when you get several inches a week for months on end it really doesn't matter how well drained your soils are. it is simply too wet and things in the ground tend to rot and we seem to be at the beginning of this.

The forecast for the coming week indicates a lot less rain. I hope they are correct on this as more heavy rain is not what we need right now 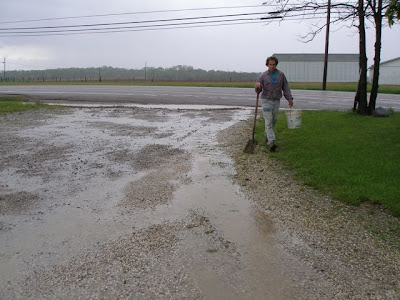 Eugene finished making a small dam to get the water to run down the hill by the highway and not through the driveway. You can see a mall ridge behind him with water collecting behind the ridge and being forced into the ditch just to the right of our drive the ODOT boyz made about a month ago. 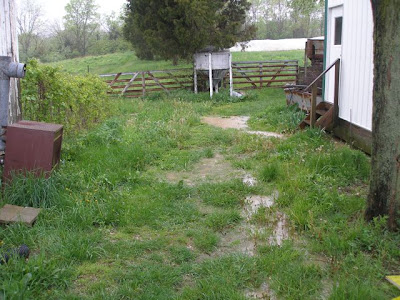 Minor flooding between the barn and the store. In really heavy rains torrents of water run under the store which is what is happening here. the water by the steps is coming from under the store. The rest is coming off the driveway. All of it goes down the hill and into the pond.
Posted by Lucy at 5:24 AM