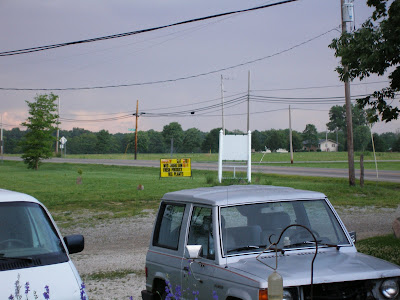 The old sign circa 2007 (the white one, not the yellow one). As you can see, you cannot read it from any distance. This is an example of a horrible farm sign


After 5 years of having really bad signage we now have a very nice sign for the Farm and people should start noticing that there is a produce farm on US 127. And it has already had effect. Before we even have the sign completely done people stopped and said they had never noticed the farm before.

The sign has been 6 years in the making. We bought two of them from a local Dunkard who was getting out of the clock repair and sales biz. He had been bothering us to buy his 2 huge signs for about a year and finally he offered the two signs for $50 each (they cost him $1500 each). We at the time had no real use for the signs but we went out on a cold windy day and cut both signs down. one fell on me and almost caused me great harm. The guy's father saw us taking one of the signs and assumed we were stealing his son's signs and almost called the sheriff on us. But we explained that his son had sold us the signs so he called him first and found we were telling the truth and left us to our work.

The signs laid around the Crubaugh Rd farm for a couple of years than were moved to this farm with the intent of getting at least one erected within a year. But since I did not want to go the vinyl letter route-I hate vinyl lettering- it took a bit longer. I wanted a proper sign that was painted by an artist. I was hoping that perhaps my father could do it but by the time we got around to getting our shit together enough to get one of the boards painted my Dad was in failing health. So that did not happen. I asked around to various artist friends and acquaintances I know and no one wanted to do the sign (I was pretty amazed, especially with the younger artists, that no one seemed to want money for their art. I guess sign painting is considered too low brow). Finally, our friend, artist and farming colleague Debra Bowles said she would do it.

So we got the big board we planned on using prepped for her (it had been, in a former life been a clock repair and sales shop sign) and took it to her farm in the spring of 2008 and waited. Many months went by and nothing had been done on the sign. Autumn happened and Debra told us she still had not had time to work on the sign because of family, goats and other issues and and now it was getting too cold to paint her unheated space. My brother visited for Thanksgiving and we told him of our sign progress and he made the observation that we were using a hippy artist and we would just have to be patient. That the result would likely be wonderful. I believe he said the fact we were using a hippy artist was perfect for us (and one who learned her craft under the teaching of Crossan Curry, one of my Dad's best friends, a person I have known my entire life and a wonderful master artist in his own right. So keeping all this in the family, so to speak).

Winter passed and spring and warmer weather was upon us and still no sign.

At this point (early May) Debra implied that perhaps she was not the person to do the sign after all. This hit me hard. Now we were looking at paying someone close to $1000 to create a design in vinyl, resurface the sign (which had been primed for pain by this point) and apply the design. Yes, we would have likely gotten a decent sign (and far, far better than what we had) but it would have been vinyl. Somehow she seemed to feel my bitter disappointment and decided that she could do the sign. So in mid May the project finally was started in earnest and by mid June she told us it was finished and we could pick it up. We drove to her farm and put the new sign in the back of the van and took it home where it languished on the front porch of the store until yesterday.

We now have a beautiful new sign and just in time for the 127 Yard Sale. I suspect this will increase business by several hundred percent in the next few weeks. I cannot use this coming week to gauge as I expect business to increase by at least 2000% during the yard Sale (as it has the past 4 years) 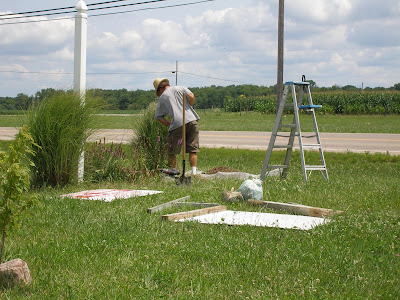 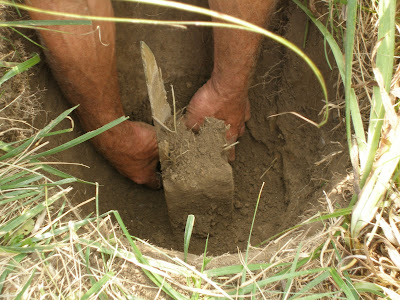 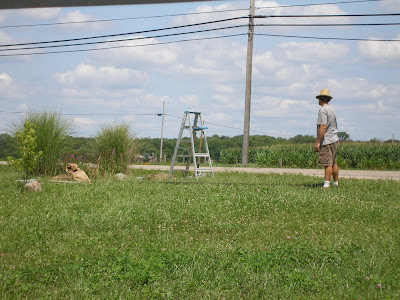 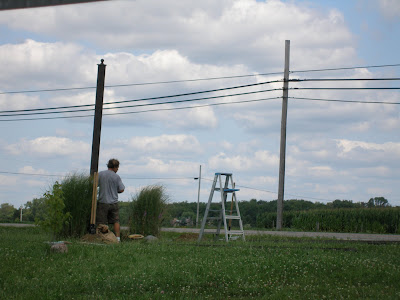 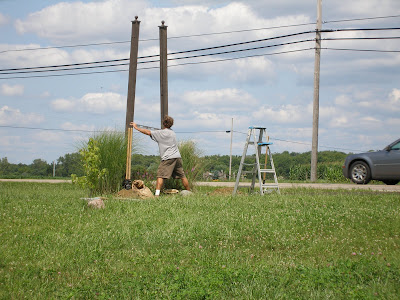 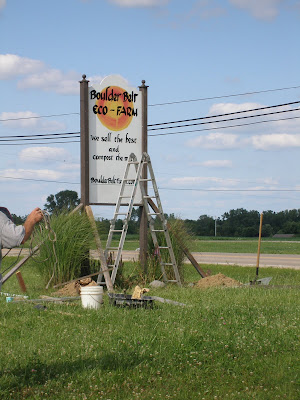 Sign is up but not quite finished. Eugene is bring a rope to put around the sign so the side bolts can be tightened Sign is up and almost finished. Still needed to pour concrete in the post holes and than the final step is painting the white horizontal board so it matches the rest of the sign.
Posted by Lucy at 6:31 AM