New market farmers facing an impending farmers market season will ask what is the best shelter to get. So today we will discuss what is best and what to avoid.

Many people will say get whatever is cheap. In my opinion it is best to stay away from the $100 and under shelters you can buy at any Wal-Mart, Big Lots and even grocery super centers like Kroger's . The photos below show such 2 cheap shelters. The support system for the red canopy is a bad design. It is weak and the supports have a nasty tendency to bend and break at their joints (any black piece you see in the picture below) when it is being raised or lowered. The mechanism that locks the legs is usually hard to use.

I have seen a lot of this kind of design fail at market due to heavy snow load, wind, and rough handling. I believe we own at least 5 broken frames (they make good scrap for projects and the canopies, even if ripped a bit make handy shade cloths) and one that is one piece but was frustrating for the owners to put up and down they one morning gave it to Eugene after, for the 4th time, he helped them put the thing up. 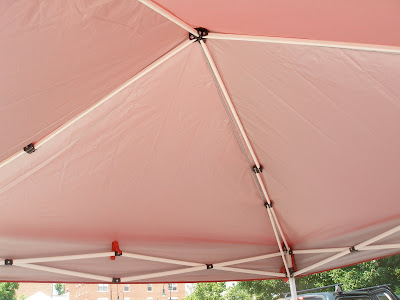 The photo below shows a cheap EZUP Knockoff (though it may be a cheap Express III or Encore II). The support system looks a lot like their "Truss System" but it is not built nearly as well. yes it does have cross pieces connecting the sides to the middle support but the material the use for the joints is weak. You can see that the frame is broken in this picture (that would be the black thing sticking out in the lower left) 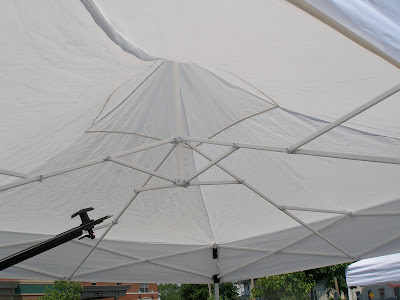 What we use is an EZUP Express, which they no longer make. These days you would buy an Express II, which is pretty much the same, just more expensive. You will pay at least $200 for a decent shelter be it an EZUp or a Caravan. Sides will be extra, usually, and my experience, not needed all that often (unless you sell something like soap or something else that cannot get wet). Our EZUP is 9 years old this year and it is in great shape. We did have to replace the canopy 2 years ago but the frame is solid. 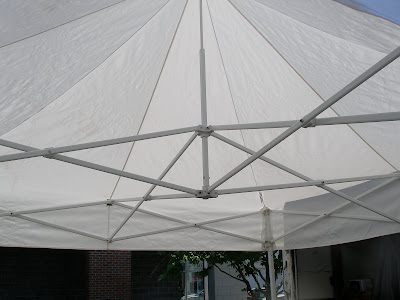 Just what makes these shelter so much better (and worth the extra money)? It is the truss design
As you can see in the picture above of my EZUP the support system is completely different from the red canopy above and somewhat different from the cheap white (possibly an EZUP Express II or Encore II) shelter . You can see there are supports going across the area of the shelter connecting all four sides to a central support. And that the truss is flat not at an angle as it is with the cheaper models. This makes the whole system a lot stronger. And it makes the things a lot easier to erect and tear down.

Now lets talk costs. I will assume if you are growing for market your are serious about making your farm into a business and that you will be paying taxes on this business. These shelters are a tax write off so why go cheap. The higher end shelters look much more professional than the cheap back yard shelters and you always want to project yourself and your farm as professionally as possible. A high end shelter does tell the public "Hey, I'm serious here and I plan to be around for years".

And how cheap are the $100 shelters if you have to replace them 3 or 4 times a year? Not only will you be spending as much for a series of cheap crap shelters as you would for a really high quality EZUP or Caravan but you also will be wasting time going back to the store to buy more and will have to deal with disposal of the broken units. Not to mention the shelter will almost always break as you are putting them up or half way through market. It almost never will break at home or when you are done for the day (Murphy's Law prevents this happening other than on very rare occasions). So it will cause a crisis at market and you will be without a shelter for the day.

In conclusion, I feel it is well worth the extra money to buy a good shelter from the get go, especially if you are doing more than 2 markets a week. In the long run these will save you money and time.
Posted by Lucy at 3:03 PM

Hi Lucy,
It was so nice to meet you today at the winter market. I hope you had a good day with sales.
Patty Schultz