Our Season So far 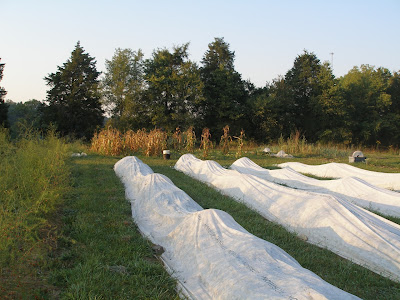 Despite the drought, we have had a good growing season. Not everything has grown well but most of our crops have done well for us this year. Roots have not been all that great for us. The carrots have been ravaged by carrot maggots and we have lost about 1/2 the crop. Beets have been hit and miss all summer. We have generally had a few but they have rarely been great beets. Some kinds of radishes have done exceptionally, other types have barely made roots. Onions, garlic, leeks and scallions, on the other hand, have done very well for us this summer (and will continue on into fall and winter).

Kale has been spectacular, though lately it has not been growing well. The chard was doing well until early August when it got some fungus that looks like black pepper has been sprinkled all over the leaves before the leaves turn brown and rot. The leafy cool weather greens did well in spring and we have had arugula since early August. Who knew arugula will grow well in hot dry conditions with no irrigation? Annual herbs have done especially well. We planted a lot of basil this year and all of it has produced abundantly. Parsley has also done well, though we had some major germination problems this spring so only have 12 plants. Dill has been a surprise. Eugene planted some in early summer and it got forgotten until late August so it went to seed all on its' own and has done a super job of thickly reseeding itself making for a gorgeous bed of cutting dill. Cilantro has been real hit and miss. It hates hot dry conditions so has not grown very well most of the season, that should change in a few weeks since fall has now arrived.

Corn was another disappointment. We rarely do good sweet corn. It is very hard to get clean well filled ears producing it organically. We do not use treated seed so we cannot plant until the soil is at least 60˚F which this year was mid May, well after they rains had left. So from the get go we had some serious issues with the sweet corn. What we ended up with was basically crappy corn. About 10% was sellable another 15% we froze for winter and the rest was composted. I don't know if we will continue to grow sweet corn. In theory, we need it for the farm stand, though our sales were not horribly impacted by not having much corn this year and I believe that we can get our customers not to expect sweet corn but to look forward to over 100 other produce items we grow at the store. For all the time and cost put into growing sweet corn it is one of our least lucrative crops. But I am positive Eugene will hanker to plant sweet corn next year and so it will be planted.

The nightshades-tomatoes, peppers, eggplant, potatoes have all done quite well. I have noticed these crops tend to do much better in dry conditions than wet. Last year we harvested, maybe, 200 peppers the entire season and most went into the freezer and were not sold. This year we have already harvested close to a thousand sweet peppers and the season is far from over. The hot peppers have loved the hot dry conditions and have been extra prolific. Tomatoes would have liked a bit more rain, I think, but overall they did well, though it seems the season was a bit short as after this week we will likely not have any tomatoes and I noticed at market this week very few other farms still have 'maters. Eggplants have done better for us in the past but this was a good year for them, no the less.

The strawberries have been a real workhorse all season. Early and mid September was not a great time for the berries but other than that they have produced high quality fruit. The raspberries have been a disappointment. Between the Easter freeze, birds and Japanese beetles we have not gotten a good harvest from either the Latham which produce one time or the heritage that produce spring and fall. The berries we have managed to harvest have been excellent, just not at all plentiful.

Now that it is autumn we will be harvesting spring mix and lettuces soon. Hopefully, we will get some rainy weather this fall, though I am not counting on it. Lettuce, especially, likes rainy conditions. Thankfully we have a drip irrigation system and we know how to use it so the leafy greens will grow well enough for us.
Posted by Lucy at 6:46 AM