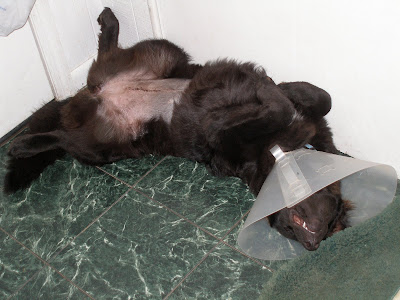 The Betty Emergency has ended, today her stitches came out.

She has been allowed complete run of the farm since Friday and she seems hail and hearty.

The E collar was a godsend. That kept her away from her stitches and allowed her to heal. But sadly the Ecollar did not last very long. By tuesday it had gotten broken some how be ause we were allowing Betty to run around in the fenced back yard and while i was not watching she ripped the thing apart. but it was nothing strips of duct tape could not fix. So for two more days she sported the latest in e collar/duct tape fashion before ripping the thing apart again. Since the vet people said she could get her stitches out as early as Friday and she was not bothering them we left it off and we had one happy pup on our hands. Freedom to run and no stupid lampshade thing on her that kept getting in the way of everything.

All in all she was a good patient. Much better than I expected. We did have to stay with her pretty much all the time while she was wearing the e collar or she would do things like rip up carpeting but we live a life where that can be done. And it was hard Friday and Saturday after the emergency surgery. We could not easily stay with her on Friday and get all the stuff done that must be done to prepare for the farmers market. So the solution was to put her on a chain near where i was washing produce in the morning. Early afternoon is always nap time so we could leave her be for 2 hours but than late afternoon both Eugene and I had to get things bagged and bunched and Betty did not want to be alone so we took her to the store which she really disliked.

Saturday was worse because we both went to the market. We had considered one of us staying home but decided we both should go. So we went and got through a cold and windy market. came home and found Betty had chewed up a part of one of the carpets. Bad dog! But we were able to stay with her pretty much all the time for the rest of the time she had to wear the e collar and once that came off she quit being so needy and destructive.

We are very appreciative to all the people who have contributed to the "Betty Fund". This idea came up on Face Book conversation about the Betty Emergency, via Rose Campbell-Blake who commented that people should donate towards paying off Betty's emergency surgery. And what do you know, this has happened and the Betty Fund was born. Betty (and Eugene and me) have way cool friends.

I wish I could say the same about the vet we used. we have not been able to talk to her since the emergency surgery despite having been in there twice. We will not be returning there.
Posted by Lucy at 3:26 PM