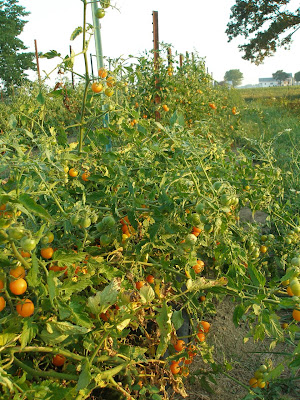 Cherry tomato hell has hit Boulder belt. This happens every year when we have more cherry tomatoes than we can possibly sell but they have to be harvested anyway. If we do not pick them they will start splitting and rotting on the vines which will attract the wrong insect crowd as well as a lot of fungi, bad bacteria and viruses. The result will be dying vines loaded with inedible fruit long before frost kills them off. Something we want to avoid

So yesterday afternoon I went out with a gray 3/4 bushel crate in hand and started harvesting the loaded vines. I started with Cherrywine, a pink cherry we are breeding/stabilizing. I plopped the crate on the ground and sat down in front of the first plant and started in on picking. I picked handfuls at a time, careful to toss on the ground any that were split, bitten into by hornworms or army worms or were soft and/or off color. All of these things means that the tomatoes will start rotting in their bins after picking and as we all know, one bad tomato spoils the whole bin. After 45 minutes I had the cherrywines finished meaning I had about 30 ponds of small maters and my head, arms and hands were greenish black from picking. So I went back to the house to wash up and have a smoke.

After my break I unloaded the garden cart which had about 100 pounds of butternut squash Eugene had harvested earlier in the day. I took the squash into the store front and loaded the cart with 4 gray crates and went back out to the mater patch and got back to work. This time out I harvested the sunsugar tomato. These are a cherry orange cherry tomato with a fantastic flavor and our best seller. Because this sells so well we had an entire 50' bed devoted to them (plus around 10 other plants that I got in a seed trade that were supposed to be 4 other kinds of heirloom tomatoes, not sunsugars). So once again I plopped down a crate and sat down in front of the vines and proceeded to pick. The sunsugars despite not having been well harvested for at least 10 days were in pretty good shape. After doing the Cherrywines I expected a lot of splitting and other ills but most were A-OK. I did have to deal with the problem of these plants being on short stakes and not well tied up so the tops were draped over and touching the ground meaning I had to lift up the vines with my left hand so I could pick the interior of the plants with my right hand. Next year we will buy some more fence stakes so we do not try and support tall plants with short stakes. I found several small hornworms while picking and I made sure I did not destroy any garden spider webs as they are helping us keep the white fly and cuke beetle population under control. An hour later I was done with the sunsugars and had around 50 pounds of them.

Next I was off to harvest the yellow pear which were a mess. These are on shorter stakes than the sunsugars and the plants are taller. The good thing is there is only a half bed (25') of these guys. So once again I sit down in front of the plants and start taking hand fulls of yellow, pear shaped cherry tomatoes. Unlike the sunsugar and cherrywines, these guys fall off the vines at the slightest touch. So I had to pick a lot up off the ground. These also decided that it would be best if the majority grew in the middle of the vines (i.e. underneath where the vines had flopped over. So I had to sit literally under the plants holding them up with one hand while picking handfuls with the other. All the while, at least half were falling to the ground. The good news was there were very few split or chewed fruits despite being ignored for at least a week. I was surprised to find 4 hornworms and an army worm on these plants since they had so little bug damage. Now they will have a bit less.

I took the crates of yellow pear and sunsugar back to the storefront, where we are storing the tomatoes. I ran into Eugene who asked if there were any more cherry tomaotes to pick and I said yes, the Red Pear and red grape still needed harvesting so he took a crate and brought in red pear. I went back to the house to wash the green/black crap off of my hands and arms and than went back out and harvested some okra and than half the red grape.

I stopped when I got 1/2 bushel because these are not our best seller and the red grape are a mishmash of tomato types because we planted seed we saved last year from an F1 hybrid. This means we have 4 different kinds of tomatoes growing in the red grape area, including a couple of red grape plants. We also have a round red cherry, a mini paste and a red saladette. I will save seed from the kind that are true to type and hopefully, next season most will be what we want.

Anyhoo, we now have well over 100 pounds of cherry tomatoes. Today I will go through them and the large tomatoes (of which we have around 1000 pounds) and toss into the compost any that are getting soft or, worse yet, have deflated. Than I will make pint boxes of cherry tomatoes in preparation for tomorrow's farmers market in Oxford. I like to have around 60 boxes made up and ready to go. It makes life easier at market if we do not have to be constantly refilling boxes with cherry tomatoes.

I hope we have a good market for them Saturday, I have no idea what I will do with over 100 pounds of cherry tomatoes if they do not sell. I can dry some and I suppose I could make tomato juice out of them if it comes down to that (of course I also may have hundreds of pounds of big tomatoes to deal with as well.). I will cross that bridge if and when I come to it.
Posted by Lucy at 5:26 AM